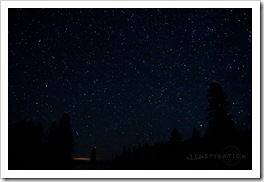 There is so much creativity involved when it comes to taking pictures at night. Most folks might say it’s best to shoot with a full moon. However, it is just as exciting to take pictures during a new moon. At this point the stars are the clearest and it doesn’t take a whole lot of experience to capture them.

On this picture, someone recently commented that they had tried taking pictures like it. I still do not know if they were successful or not, but I thought I would write out how I took this one to help anyone who has not been successful. It was actually a test shot for another image, so it was actually an accident that it was nice enough to post.

There is a big difference between this and shooting star trails. But I’ll post about that later.