About the 2012 Calendar: August

Falls in the Forest 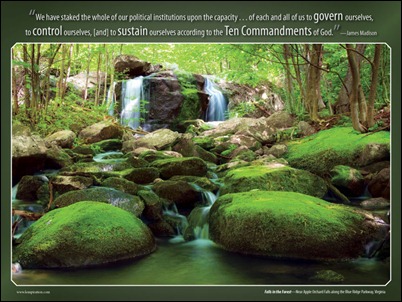 Of all the pictures in the 2012 Calendar, this one is by far my favorite! I had been on the lookout for an image like this for years, and yet I didn’t even see it when I first stumbled upon it.

It all started on May 22 of this year when I decided to take a break while driving solo along a 200 mile stretch of the Blue Ridge Parkway in Virginia. The name “Apple Orchard Falls” at one of the many scenic overlooks caught my attention, I stopped, donned my camera backpack and headed down the 1.25 mile trail to the falls. It was easy going on the way in. It was downhill. ALL downhill. Yes, this was nice, but I told myself I had better leave twice as much time for the trek back.

About 1 mile into the hike, I crossed a little bridge where I could hear running water off to my left. Through the trees, I could just make out a small waterfall crowning a pile of moss-covered rocks. But in interest of time, I passed it up in hopes of better shots further down the trail at the “real” falls. How picturesque could an unnamed waterfall be, anyway?

I found out that day that unmarked waterfalls can be pretty picturesque. Not that Apple Orchard Falls wasn’t nice, it’s just that it wasn’t picturesque, meaning it was difficult to capture it’s niceness. After trying for awhile, I finally gave up, knowing that I had run out of time and that there was a long, steep climb ahead of me.

As I passed the unmarked falls on my way back, I decided it wouldn’t hurt to spend a few minutes to give it a try with my camera. And as soon as I stepped off the trail, I wished I had spent my entire time there. The moss, the arrangement of rocks and the solid leaf canopy softening the harsh afternoon light were just perfect. Needless to say, I was extremely late getting to my destination that night, but I think it was worth the effort to get an image that would be chosen as one of only 12 images used in Lenspiration’s 2012 Calendar, now available for purchase online at Lenspiration.com.