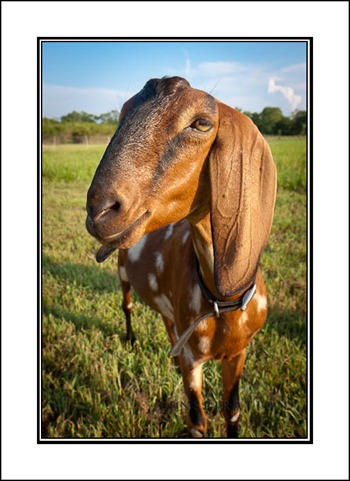 I took less pictures in the month of August than I have for any other month in the past 2 years! That is, except for December 2011 when I took a whopping 3 less pictures than I did this August. All that to say that I didn’t have much to choose from for this month’s Pic of the Month. But I couldn’t resist choosing this one because the expression is just so, well, I don’t know . . . expressive? I’d apologize, but I think I’d rather not hurt the the self-conceited goat’s feelings.

Some people say taking lots of pictures is better. Other people say taking few pictures is better. I say take as many pictures as you need to get the picture you want. Amateurs tend to need to take lots of pictures to accomplish this, but believe you me! I’ve seen pros fire their Canons (or their Nikons?) at an unmoving landscape as if the slowly fading light was a herd of antelope being chased by lions. And yet, while professionals might not need to take, and even take pride in not taking, lots of pictures to capture what they are seeking, I think it is important for beginners to stop shooting everything in sight and begin thinking about how they are taking their pictures. The motive behind whether you take many or few should lie in increasing skill, not in showing off what extreme you are.

So whether you take many or few, there’s nothing wrong with the amount of pictures you choose to take as long as it’s purpose not tainted with, well, I don’t know . . . self-conceit?