Pic of the Month: November ‘12

The Glow of Faith 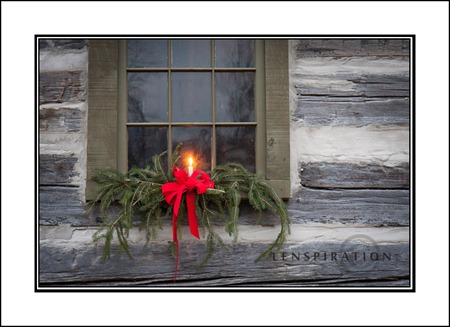 Over the Thanksgiving holiday—that charming time of year which so mysteriously blends emotive recollection with cheerful anticipation—I visited Fort New Salem with the band of friends and relatives who had come to visit and celebrate the festive season. It was cold and cloudy, and little snowflakes floated around on the periodic puffs of wind that blew through the valley. The cozy cluster of old-time, historic cabins sat braced for winter’s arrival, whiffs of smoke rising from the chimney heights. As night-fall slowly approached, I couldn’t help but marvel at how, despite it’s grim intentions, the growing gloominess worked only to enhance the glowing invitation each candle beckoned from it’s lonely window. O the difference it makes when a candle is lit, even when it is all alone!

By faith the voyaging Mayflower embarked from Old England and found harbor off the bleak New England shores.

By faith the Pilgrim Fathers set up a government on a new continent dedicated to God and inspired by a desire to do his will on earth as it is done in heaven.

By faith Thomas Jefferson was stirred to strike a blow for political independence and wrote the thrilling document that declared that all men are created equal and endowed with certain inalienable rights. By faith he said, "Love your neighbor as yourself and your country more than yourself."

By faith George Washington left his spacious mansion at Mount Vernon and espoused the cause of the tax-burdened colonists. By faith he forsook ease and comfort, choosing rather to suffer hardship with his men at Valley Forge than to enjoy the favor of a king. By faith he became the President of the newly born republic and endured as seeing Him who is invisible.

By faith Alexander Hamilton established the financial credit of the nation. In the eloquent words of Daniel Webster: "He touched the corpse of public credit and it sprang into life. He smote the rock of national resources and abundant streams of revenue flowed."

By faith James Madison gave richly of his scholarly mind to form the Federal Constitution.

By faith Andrew Jackson fought the battle of the impoverished and underprivileged many against the privileged few.

By faith Abraham Lincoln bore the awful burden of four purgatorial years seeking to preserve the Federal Union. By faith he carried a dreadful war to its conclusion without hate in his heart, saying, "I have not only suffered for the South, I have suffered with the South."

By faith Woodrow Wilson in the dreadful heartbreak of a world war dreamed a dream of a war-less world in which the nations should be leagued together to keep the peace. By faith he glimpsed that promised land which, like Moses, he might not enter. And what shall I more say?

For time would fail me if I should tell of that unnumbered host, the unnamed and obscure citizens who bore unimagined burdens, sacrificed in silence and endured nobly, that a government of the people, for the people, and by the people might not perish from the earth.