What I Learned in Prison

It’s hard to believe that an entire week has passed and the prison Journey to the Heart is over! It was an experience I will never forget. Seeing men convicted of crime facing heart issues, restructuring their belief system around Biblical principles, and even coming to a point of thanking God for their current situation was something I wish every young person could witness.

A prison isn’t exactly the place for taking pictures. I took two pictures the entire week. One of the men’s JTTH group (for which a special release had to be obtained from every single inmate) and the other of the entire group of JTTH leaders and staff. Of course I can’t post the first one, but I can post the second one. And though I can’t really take credit for it because I wasn’t the one who actually released the shutter, I was the one responsible for making sure the picture turned out.

And that’s a real benefit of knowing how the camera works. Even when someone else is taking the picture, I can make their job so much easier by tweaking the settings so they can focused on getting everyone lined up and smiling while still being confident that the shot will turn out. For this shot, we didn’t have much light to work with, but it was even lighting so I set the camera to M mode and chose ISO 400, aperture f/11, and shutterspeed 1/60sec. 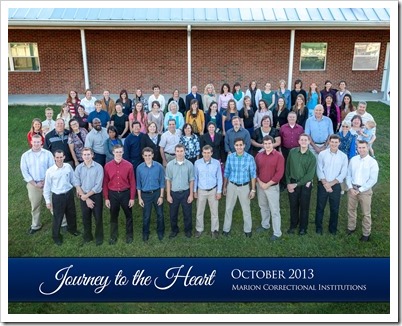 Now, those of you who just finished up CAPTURE Kansas, you understand now why I chose the settings I did, right?