I enjoyed my time in Quebec so much that there was practically no time to keep my blog updated! I’m looking forward to sharing many pictures and tips from the event. But before I jump in, I just wanted to mention the fact that the $50 Early Registration discount for CAPTURE Texas is upon us. Officially, it ended yesterday, but I’m extending it through today because I was unable to post an advance notice. This is the last reminder though! As I am still in Canada, the best way to ask last minute questions is by email to [email protected].

But now for a little taste of Canada. We had a challenging time at each shooting location because there was very little sun which meant there was very little color on the landscape. We tried coping with this by emphasizing composition and shooting more prominent subjects. But it was still very difficult. In this picture of the barn, the only reason the sky was colorful was because of the light pollution from the city of Sherbrooke. For some reason, my camera picked it up with a very distinct purple hue. Perhaps it’s not natural, but it sure eludes to the color we were looking for all weekend!

Even though colorful images were few and far between, I don’t think it dampened the effectiveness of the workshop too much, as one of the attendees pointed out to me later. At the end of the workshop, Ryan mentioned that even though he didn’t necessarily get the pictures he was expecting, he learned more through observing me scout, position, compose and create each shot than he ever could have learned through online tutorials or book learning regardless of who the photographer was. There’s something about watching the entire image-capturing process unfold in person one step at a time. To observe, attempt, fail, observe again, and attempt again. It’s practically impossible to describe. But it’s essential for “doing” learners. And it’s what I know will positively help photographers take that step forward that is impossible to take by themselves. 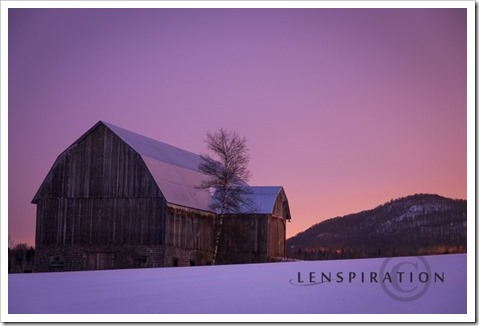