How to Shoot Overlooks

I had the opportunity to shoot quite a few beautiful vistas while I was down in western North Carolina last week. 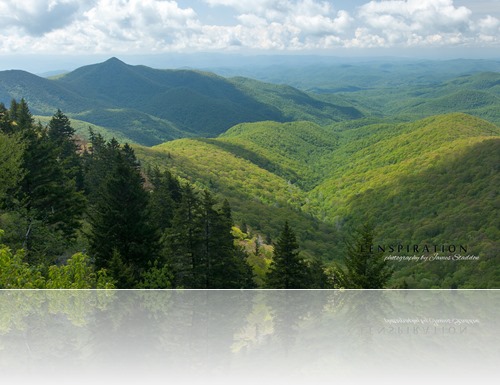 The biggest challenge with shooting overlooks is creating depth. When looking at a two dimensional rendition of it later, you can not perceive the same depth that your eyes saw when you were there. That’s why I like to include foreground elements that lead the eye into the scene, thus creating an illusion of depth. In Terrestial Ocean, the dark foreground pine trees contrast very nicely up against the bright, spring-green hardwood trees in the middle-ground. Their collective shape moves the viewers eye down to the right where it meets the fairly distant hill and valley moving deep inside the scene. After a journey over hundreds of miles in the surreal far-background, the eye is attracted to the distant, yet prominent peak on the left where the eye starts it’s travel at the through the foreground pine trees again. The circle continues, giving the illusion of depth and drawing the eye forward and backward through the scene which is difficult to break away from. 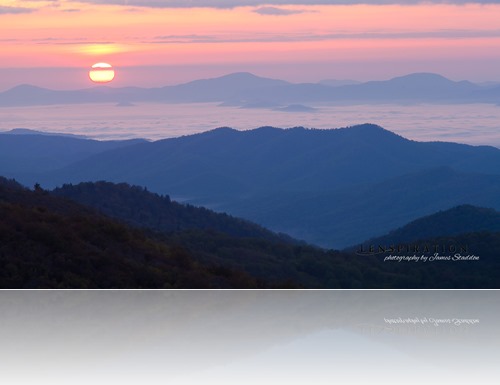 It is obvious from the first picture that you don’t have to shoot at sunrise or sunset to get a stunning image. However, the edge of light does provide colors you won’t see at any other time of day. That’s what makes this picture work. If the sky was cloudy gray, or even normal sky-blue, it wouldn’t have the same effect as the complementary pink and orange that the sunrise provided. Also, capturing the sun right as it came up was important for getting a higher dynamic range that allows for seeing a little detail in the foreground hills and and the ocean of clouds in the valleys. 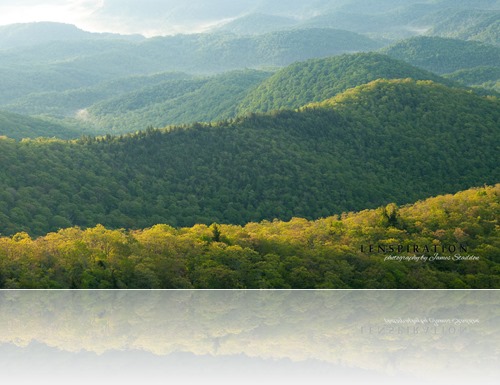 This shot was taken from a different overlook than the first image, but they were both taken relatively early on in the day. Neither image would look nearly as vibrant if it weren’t for the warm light of morning, though. I think this shot is interesting because at first I didn’t think it was going to work. I’m practically looking due east into the sun with the central mountain range facing me completely in shadow. However, just barely including the top of the foreground ridge, fringed with light, provided multiple dark/light layers that gives the interest necessary for making the shot worth looking at. I purposely didn’t include the sky in this image because, looking toward the sun, it would have been quite colorless. Plus, it would have quantified the scene making everything appear smaller and less like the valleys could go on and on into the distance.

To receive the Mountain Ripples wallpaper for free, sign up for the Latest from Lenspiration updates. To receive access to the other two wallpapers, along with the entire collection of Lenspiration wallpapers, make any purchase on the Lenspiration Store or register for a CAPTURE Workshop.