On the fourth day of the California Loop, we drove from San Diego to Death Valley National Park. I was lazy and didn’t feel like getting up early, so I missed whatever sunrise opportunity there may have been on our last day on the Pacific coast. But what I saw out the window from my bed at 6:00 that morning was cloudy skies, so I don’t think I missed much.

I don’t recommend going to Death Valley in July. At first, it was a novelty to experience the heat in one of the hottest places on earth, but after a few hours I began to understand what “relentless” really meant. The temperature gauge indicated 121 degrees in the shade. But there was no shade. The direct heat of the sun made you sweat just standing there. A dry, hot wind blew continuously. It felt like we were standing in a convection oven. And there was nowhere to go to get out of it. The car was a temporary relief, but only if the air was on full blast. The minute you turned off the air conditioning, the car would heat up to hotter than outside. We were only there an afternoon and a morning, but by the time we left, we were finished with desert climate!

It began to be bearable after the sun went down. And driving up to higher elevations to camp for the night was pleasant. So shooting the sunrise from the Mesquite Dunes actually turned out to be quite fun. It was hard though, because the wind was blowing sand everywhere and I didn’t have time time walk out to the big dunes before the sky reached it’s peak color. I had to find something where I was. The following progression of images is typical to what I take before I actually get a shot that I consider a keeper:

1. I turn my focus on a combination of elements I like: the colorful sky, mountainous horizon, and foreground dunes. I first focused on the mountains and found the image to look quite plain. 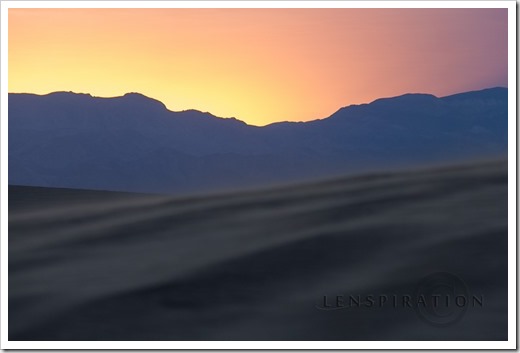 2. I focused instead on the dunes then. Because I was shooting in Aperture priority, the camera exposed for the dunes and produced an image that appeared overexposed. However, I like the dunes in focus better for sure. 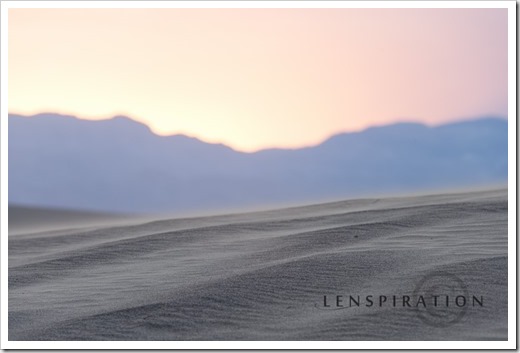 3. I switched over to Manual, starting with the exposure reading that was used in the first image. A much more compelling, colorful image. But it was still missing something. 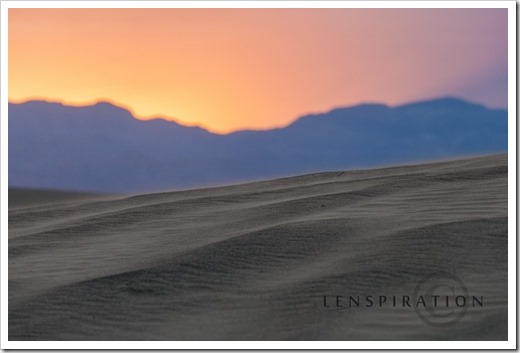 4. I looked around to see if I could find anything to include in the middle-ground. After a little searching, I found almost the exact same perspective only with a bush included. There were lots of bushes around and hard to single just one out. Positioning is key. So, I took the shot. But I still don’t like it much. I wanted the color of the sunset to fill the sky. 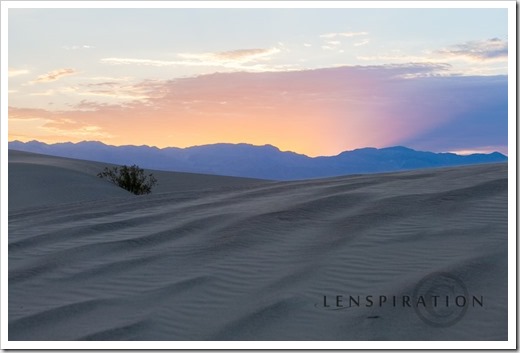 5. Using a telephoto lens, I repositioned myself a few times and zooming in, I finally got what I was looking for. I made sure to focus on the bush because that demanded more interest than the foreground dunes and would look out-of-focus if I hadn’t. 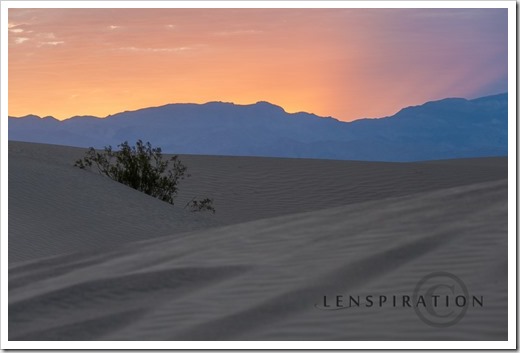 This all happened in a matter of minutes. Transformation from a boring shot to a compelling shot doesn’t always take so short amount of time, but after you start doing this over and over and over again for every single sunrise and sunset (which never wait for you), you learn quickly to do things more quickly. Eventually, this progression will become quite typical.