Behind the Shot: Sky Rock Overlook

The Shoot to Serve assignment that expires tomorrow, Woman Worshiping God, has been on my radar for several weeks…

Problem is, I don’t live near any epic overlooks or “perfect” locations that the assignment demands. Yes, I live in the “Mountain State”, but the mountains here not the kind of mountains Margret is looking for in the cover of her book. Nor could I find any of the kind of “rough paths” that she was looking for near an overlook near my home. I know of a dozen places not close to home that would work…easy…but none nearby.

So this meant I needed to do some scouting to find a place that I could at least try to make work.

I wish I could say I had all the time in the world to drive around and find cool places to photograph. But I don’t. So I try to fit it in by checking with locals to see if they know of any places that would match what I am looking for, and by getting up early and scouting around before work days begin.

One photographer friend referred me to Dorsey’s Knob. Not the most epic place in the world, he said, but it would be worth checking out.

So I looked it up. It was up in Morgantown, only about an hour’s drive from my house.

A week or so later, it happened that a friend needed a ride up the Pittsburg airport. The return trip would bring me right through Morgantown…right at sunrise.

So, I volunteered to help with the airport run!

I was too doubtful of the location to bring my sister along to do the “real assignment”, so I decided I would just stop in to scout it out, whether there was a beautiful sunrise or not.

On the way home, I didn’t think there would be much of a sunrise. It was pouring the snow in Pittsburgh and when I arrived at Dorsey’s Knob there were still plenty of clouds. But there was also a tiny sliver of potentially clear sky above the horizon… 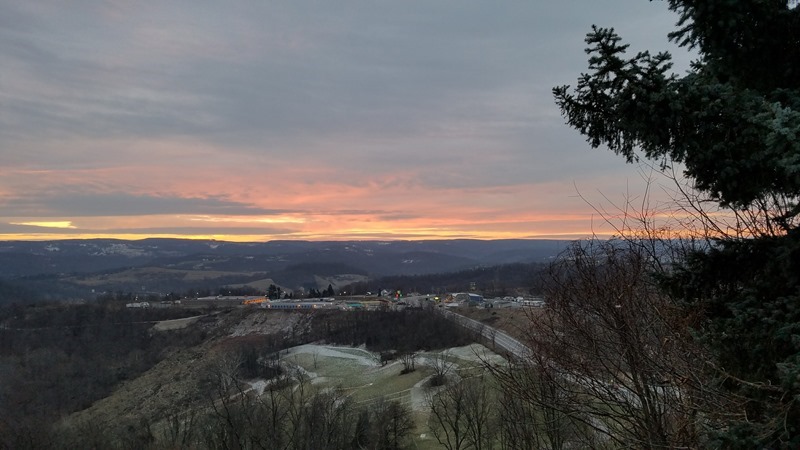 Whether the sun decided to come out, it was worth the stop. As I awaited sunrise, I spent the time working out compositions and angles for the “real assignment”. True, it was not an ideal spot, but it could work in a pinch.

When the sun came up, it was an added bonus that it actually penetrated through the clouds. It’s helpful, you know, to have actual sunlight for calculating exactly how light will lay on the land. 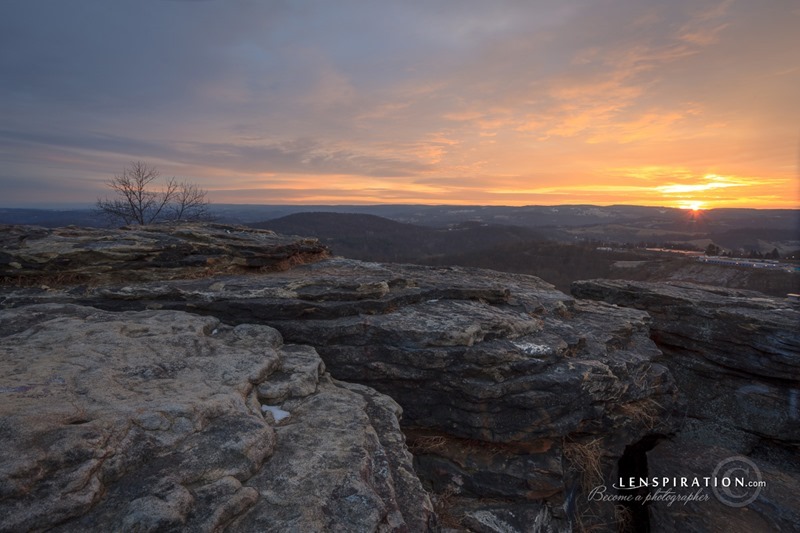 I experimented shooting both horizontal and vertical, keeping in mind: “how would I shoot this for the cover of a book, to incorporate a rough path and ominous mountains in Photoshop later?” 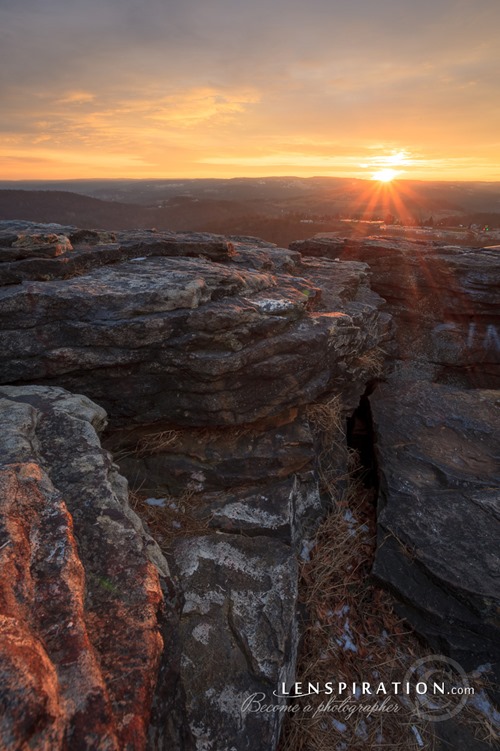 There was graffiti all over the place too. Mountains and paths wouldn’t be the only things I’d have to Photoshop for the cover of the book… 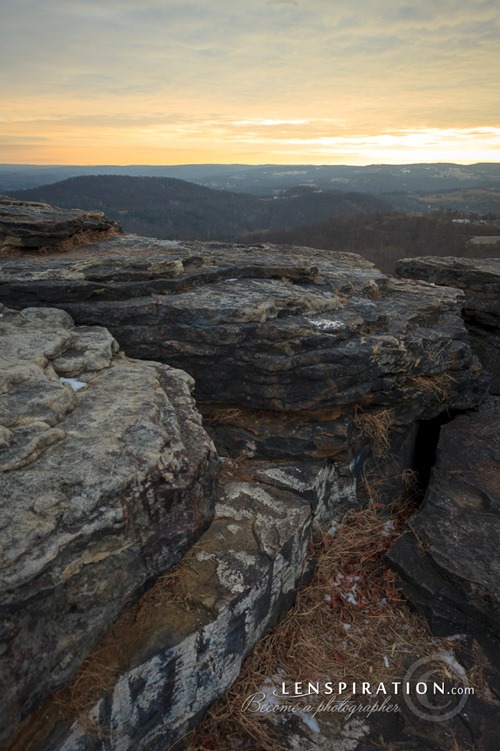 The sun disappeared after only a few short minutes. Thankfully, it was a nice enough sunrise to feel there were one or two good shots that could work for a desktop background… 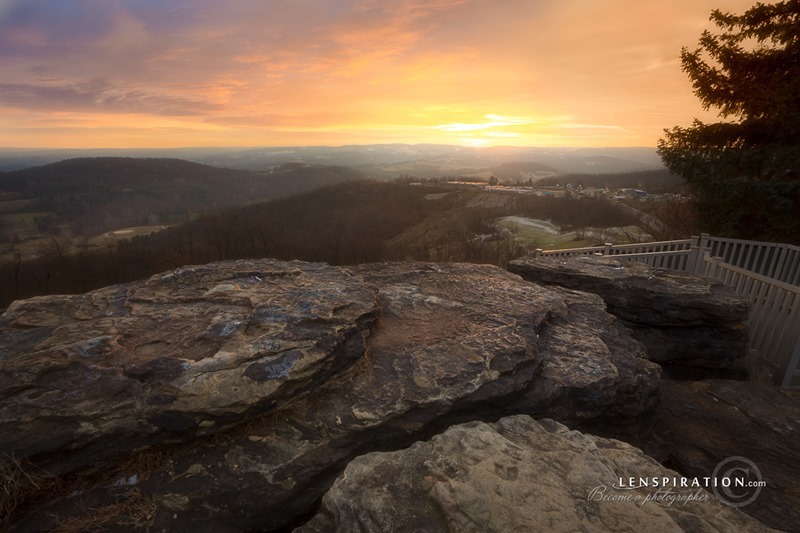 No, it wasn’t the “perfect spot”, but by the time I left I had concluded that it would indeed be a good enough location to attempt shooting the “real assignment” before the December 23 deadline.

And, so, that’s where I went to shoot the “real assignment”!

I can’t wait to share how it went! But that will have to wait for another post.

In the mean time, please feel free to submit your own photos for this paid assignment at www.lenspiration.com/shoottoserve. 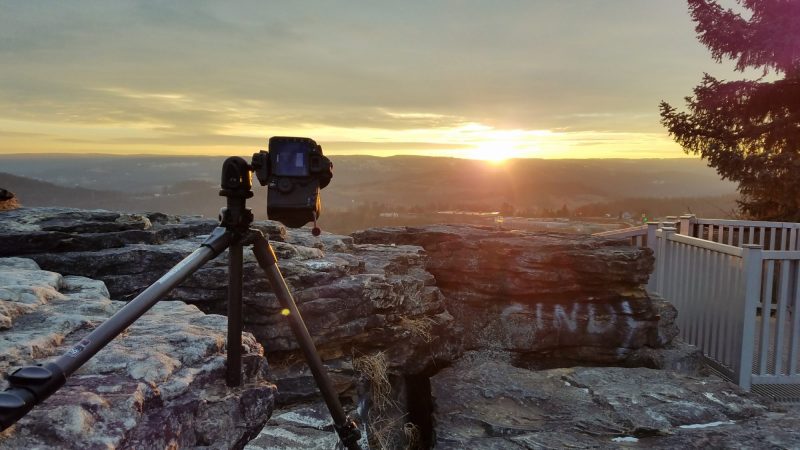