I wanted to reach the river. Before obtaining a bicycle, this would have meant a several hour hiking excursion, but now I figured I could reach it in about half an hour. The problem was, even after looking at Google Maps before I left, I didn’t have a clear route of getting there. “Just go northeast” I told myself.

It was 6:30 in the morning, but the sun was already up over the flat plains of Gimpo-Si city. My goal was to find the best route to one of two bridges that crossed the river and then be back at the office for group devotions by 7:30. I only brought my point and shoot camera and binoculars because I knew I wouldn’t have time for any serious photography. 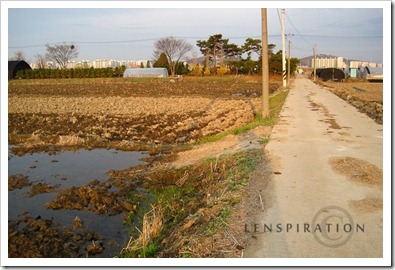 After biking along a highway, passing under another, cruising through some countryside, finding my way around a clump of hills, and finally finding a tunnel that granted passage across another main road, I descended upon the Han River, a beautiful, peaceful sight on that gorgeous morning. It was exactly 7:00. I hadn’t made it to either bridge, but I could see both of them to the northwest and southeast and figured I knew what highways to follow to get to them in the future. 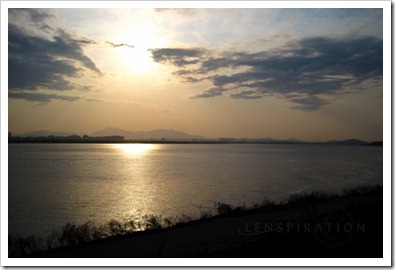 But there was one thing that impressed me most about the view that spread itself before me: clouds! Thin, whispy, ornamental puffs of clouds floating along in the sky. I never thought I would be impressed by clouds, but having been here for several weeks and seeing nothing in the sky but haze or solid blue, I was thrilled to see something break up the monotony. Clouds and the formations they can create are essential to landscape photography, so to see that some have begun to “arrive” is a happy sight.

A happy sight for now at least; perhaps I’ll be wishing for solid skies again once we hit the rainy season in June. 🙂 But seeing my stay here in South Korea goes only to the beginning of May, I don’t think I’ll have to worry about that. 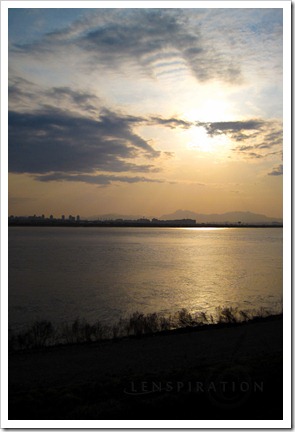