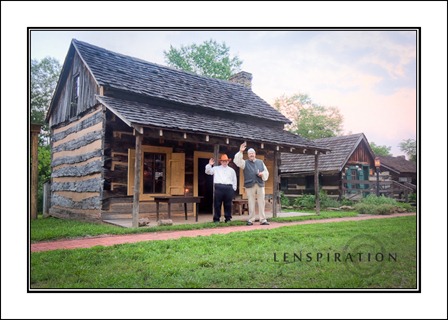 Back in December of 2011, during a visit to Fort New Salem for an event at Christmastime, I happened to talk with someone on the Fort’s board of directors who expressed interest in possibly doing a customized calendar specifically for the Fort. Since that time, I had taken pictures at the Fort every now and then to build a small portfolio of images to use in a calendar if the project ever materialized.

But now it was July, high time to begin thinking of customized 2013 calendars, and I didn’t know exactly how to move forward. Against this backdrop, Donald asked if I would like to go to the last even of the summer to be held at the Fort, an evening of storytelling called Myths of the Mountains. I almost didn’t go because of other projects I wanted to get done that day, but I decided to go in hopes that the Lord would give direction on how to move forward. An e-mail would work, but a personal conversation would be so much better.

So I went. And one of the first people I met was the man who I had talked with back in December! Almost within minutes after arriving, I had a list of tangible objectives for moving the project forward. One of those objectives was taking more pictures, so I spent the remaining half-hour of light, which happened to be at the ideal time of sunset, walking around the Fort taking pictures of the guests, activities, and historically-dressed “residents” of the fort. By the time the evening was over, I stood in amazement over how so much of what I’d learned from the past few years taking pictures all over the world played into making the most of this amazing opportunity. We shall see how the Lord leads from here!