On the Road to Chicago

Wow! It’s been a whirlwind of a week preparing for what has been amusingly dubbed as “The Rockies Road Trip”, a two week vacation and photography excursion to the Canadian Rockies in western Alberta, Canada. On Tuesday my family and I (hereafter described as “we”) began the trip by driving from West Virginia to Chicago to spend a week with Robert & Kendalyn before heading further west. We didn’t stop much along the way, but the drive reminded me of this picture I took a year ago on the same stretch of road through the flatlands of Indiana. 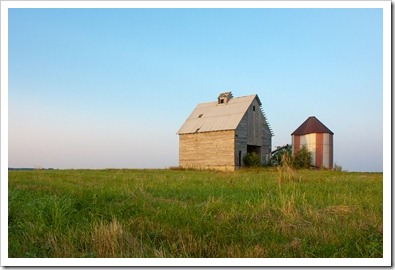 About the picture: Driving solo from West Virginia to Chicago last summer, I was ready for a stretch-break after passing through the metropolis of Indianapolis. Because it just so happened to be at the golden hour of light, I decided to take a random exit in search for a potential photo op instead of stopping at a highway rest stop. It was a lot of fun! Corn fields, bean fields, old barns, vast hay fields . . . it was simply the perfect stop to jump out of the car, stretch and take in the country scenery. Because in situations like this all the land around is private property, I made sure to stay on the road. I also always stick close to the car. To get a good perspective, I’ve often set up the tripod on top of the car. For this particular image, I tried several different compositions with the grass in the foreground, but I settled on the one that kept a simple foreground to complement the simple subject and simple background. There wasn’t much to do in post processing except to increase the contrast a bit to get the colors to pop.