It actually snowed last night! What a great excuse to get outside and play around with the new camera! And how refreshing it was to be out in the “field” again.

The 5D Mark II is very similar to my old 40D in appearance but has some nice improvements. The screen resolution is unbelievably better, it’s much easier to access Live View (which allows you to use the back screen instead of the viewfinder to take pictures), and it’s nice that the Menu, Info, Play and Delete buttons are aligned along the left side of the screen instead of below it. It’s easier for the thumb to access quickly. The fact that it’s almost waterproof made it nice that I didn’t have to worry so much about the periodic flurries of snow that descended from the windblown treetops.

All the exterior improvements are small in comparison to the interior differences between the 5DII and 40D, but they were harder to appreciate today. While I was shooting, I wasn’t in any situation where the ISO quality could be tested and I’m not much of a videographer yet. However, I must say that I was impressed with the feel that the full frame sensor gives. I can’t explain it really, there’s just something different about it. My old 17-55mm lens on the 40D’s 1.6 cropped sensor was actually 27-88mm. The new 24-105mm lens on the 5DII is . . . well, actually 24-105mm. I’ll just have to be patient ‘til I can afford a true wide angle lens, not to forget an extension for my 70-200mm (which you could say was actually 112-320mm on the 40D, if you follow the same logic). I can’t imagine what 17mm would be like on a full frame camera!

Anyway, enough geekiness. I wanted to post these two pictures I took today of the road that goes up behind our house. The only difference is that in the first picture I stood far back from the road and zoomed in as far as I could, whereas in the second picture I jumped up close to the road and shot as wide as I could. I thought it was unique that the same subject could look so totally different depending on the focal length the photographer chooses to use. Try it out! It’s great fun and a good concept to keep in mind if you want to learn to shoot outside of your comfort zone. 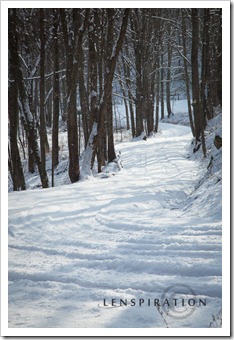 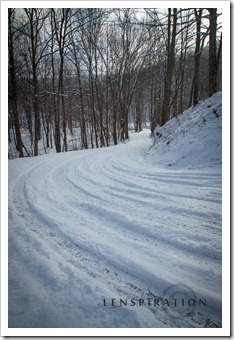 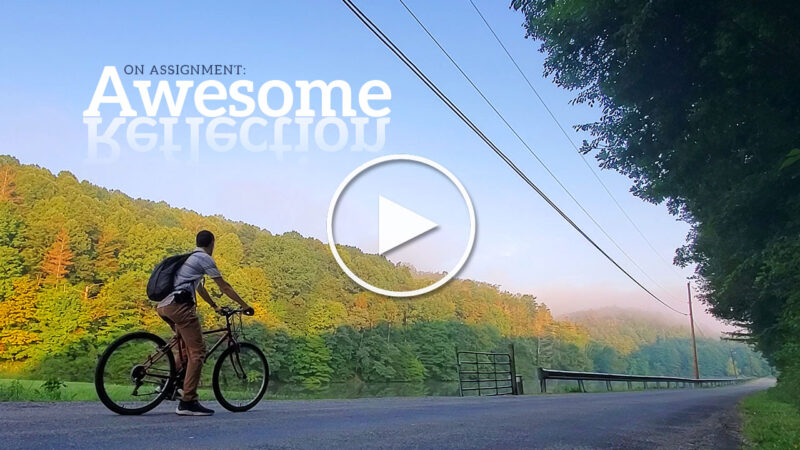