One of the sessions I was assigned to shoot on the ACTION Photography Team last week at the HEAV Convention was “Dad’s and Donuts: Men on a Mission” with Todd Wilson. Seemed like a rather boring event, until I arrived.

I was shooting with one of the other photographers on the team. Daniel had a wide angle lens. I had a telephoto lens. He focused on the group interaction and activities going on. I focused on the small details and close-ups on the speaker.

When shooting shooting speakers, it’s natural tendency to stand in the back of the room and shoot from far away. The problem with this it’s difficult to incorporate depth. Pictures just look normal and uninteresting. What I wanted to do was explore some different perspectives to show how even shooting a speaking at the front of a room can be an interesting shooting assignment.

I did start off in the back of the room. But instead of standing up and shooting over everybody’s heads, I bent down on my knees, zoomed in as far as I could, and positioned myself in such a way that allowed me to use the people in the room to help fill the frame. I moved in to get physically close to the folks sitting on the back row. Because I’m focused on the speaker, the elements physically close to the camera (the listener on the back row) is blurred out. Also, there is more than just one person blurred out. The fact that there is more than one listener, helps make it look like he’s speaking to an audience than to one person. I wish there was a third head in between the two listeners though. That just wasn’t how things were set up. 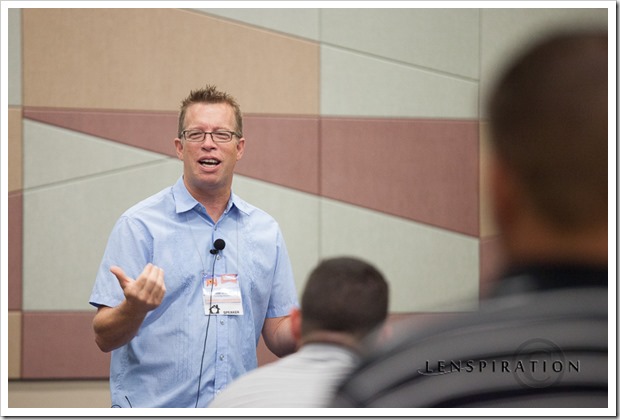 Next, I saw these dinosaurs on the tables and thought it would be fun to try to incorporate them in an image. Because Ken Ham and Buddy Davis were main speakers at the Convention, it was appropriate that I incorporate these decorations in my pictures. Again, I zoomed in as far as I could and positioned myself so that I could let the decoration help fill the frame. Instead of focusing on the speaker, I focused on the decoration and waited for the speaker to move into the right position with the right hand movements. It took a while to get something I liked, but Todd is a dynamic speaker so it wasn’t as difficult as I thought it would be. (You should hear him speak, by the way; he’s great! Half the time I was on assignment I was sitting in the back spell bound listening to his stories.) 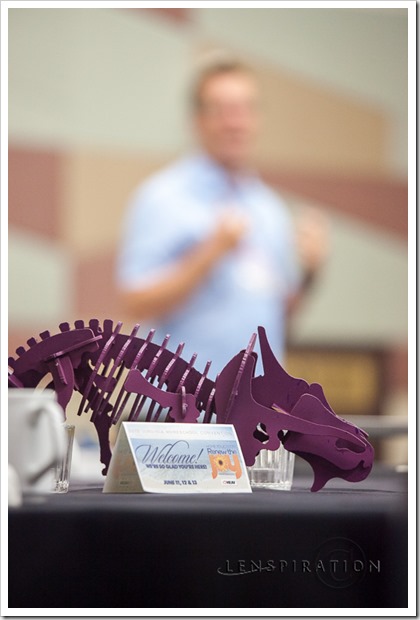 In the same position, I wondered what it might look like to have the speaker in focus with the decoration out of focus in front. Well, as you can see, the foreground blur looks more distracting than it does creative, so I didn’t spend any time trying to make the composition work, and moved on to the next composition I had in mind . . . 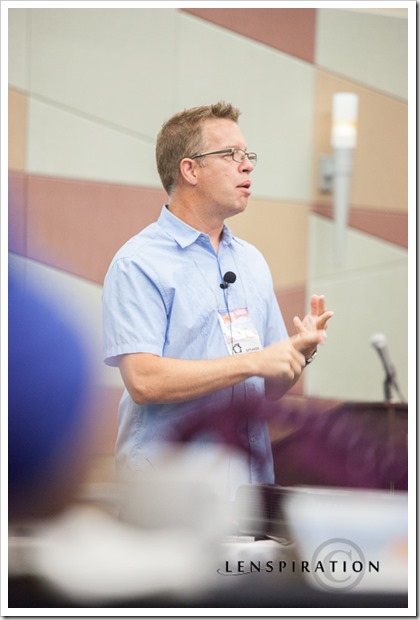 The next composition I had in mind was one from behind the speaker with the listening audience visible in the frame. I think this composition was possible in this room because it was a very wide room and there was plenty of space around the speaker that my presence in the front of the room, though obvious, I didn’t feel was distracting. I didn’t want a shot of his back directly, so waited from him to look in a direction that would allow me to at least see his profile. Focusing on the speaker was important. The picture would appear out of focus if the audience was in focus. This whole time, I’m zooming in as far as I can to get as shallow a depth of field as possible. 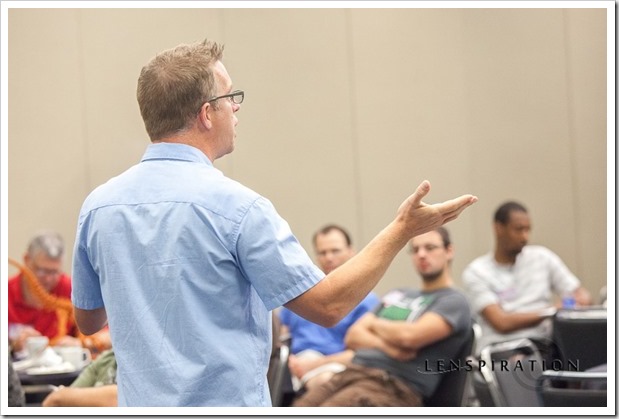 Lastly, while I was in the position I was in, I decided to zoom out a bit to capture the whole audience. If I could have backed up instead of zoomed out, I would have, but where there’s a wall, there’s a wall. I wanted to make sure that I had more than just tight speaker shots so the HEAV publications team would have some options to work with in their creation of next year’s Convention schedule! 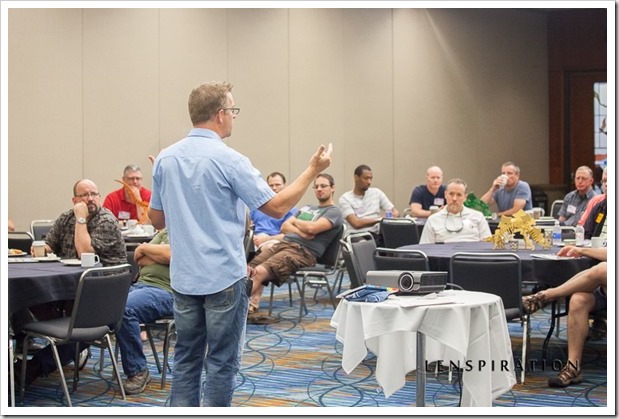 It seems a bit odd, even though I’m still worn out after the ACTION, that I’m looking forward to the 2016 HEAV Photography Team already. I can’t say how exciting it is to shoot to serve for the needs of other ministries and organizations!