Though the trees are still mostly green, though yesterdays temperatures rose almost to 90 degrees, though in most respects it still feels like summer . . . there’s a particular rasp in the breeze-tossed trees, the chill of night lingers longer each morning, the evidence announces that a new season of the year has arrived. As of today, it is officially autumn! 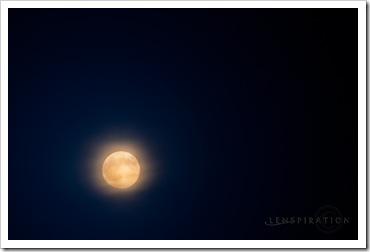 On my way back from work this evening, I noticed the full, over-sized moon rising near the pale horizon with that enigmatic appearance which typically accompanies the arrival of the autumnal equinox. It was not until after the firmamental phenomenon had faded that I was able to pick up a camera, but the moon was still a fascination to me, hanging there in the deepening dusk, and I figured it was better shot then not.

I’ve learned a few things about shooting the moon over the years: