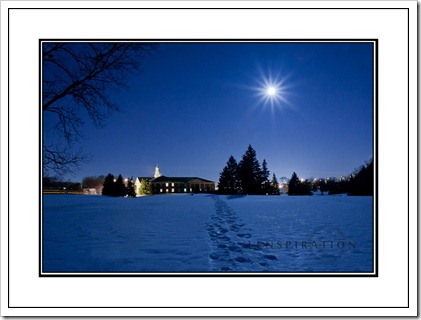 It’s fun to go though pictures of the past month as I sit in my cozy little office looking outside at the blowing snow and thinking about the blizzard warnings here in Chicago. There was snow on the ground for most of January, and it appears as though there will be for the beginning of February, at least.

Can you guess what time of night this picture was taken? Believe it or not, it is 6:02 in the morning. When the moon is full, it travels almost exactly opposite as the sun and sets at about the same time the sun rises. Morning is usually a better time to shoot the moon.

I was walking to work early that morning as I gazed up at the surreal beauty in the heavens. Normally, I do not have all my equipment with me when I walk, but for some reason, this morning I did. “How coincidental” I thought. It hadn’t been clear for the past few days either.

As I was setting everything up, I began to realize how cold it was. They said it would get down to 9 degrees; but never mind, this was a rare opportunity. Just before taking the picture, I set the aperture to f/16 so that I it would create starbursts of each light source. To keep the shutter speed no longer than 30sec. I bumped the ISO up to 800.

As the camera took the picture, I stood off to the side doing jumping jacks to keep warm. When the picture had been taken, I only had time to set up one more composition before my fingers really became painfully cold. Finally I picked up the tripod and trotted to a warmer climate.

When I got inside, I checked the temperature: it was –1, but felt like –23. It sure felt that cold to me!