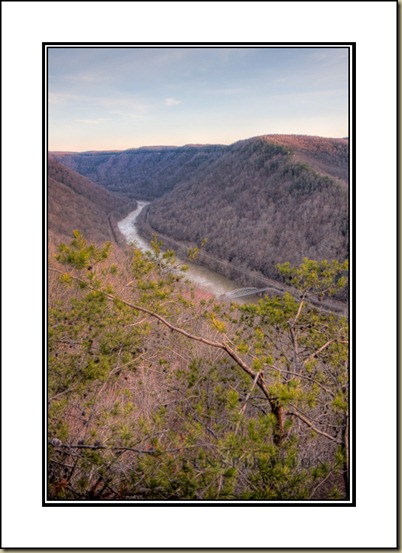 Owing to much planning, traveling, and work, there was not much time for photography this past month. But having a camera handy at all times does pay off.

We had been on the road for over six hours, and there was a good three hours left to go. It just so happened that it was nearing sunset when we crossed the iconic New River Gorge Bridge near Beckley, West Virginia. Would it be worth it to try and get some pictures?

Most of the nicer images I took on that short walk to the bridge overlook were taken directly into the sunset. But there was a surreal attractiveness about the gorge winding toward the east. Knowing that the camera didn’t have the ability to correctly capture the effect, I bracketed by 1 and 2/3 stops over and under the correct exposure so I could merge them into one later on. Just a few days ago, I brought the pictures into Photomatix and. . . voilà! it’s exactly how I wanted it to look.

When you’re some place scenic, point the camera in all directions. You never know what direction will be the best.