Odd title, I know. But it’s the root of something I’ve been thinking about recently.

Here in Gimpo-si, on the west side of Seoul, South Korea, it is certainly a blessing to be in the suburbs instead of dead center in the metropolis. It’s not in the middle of nowhere or anything, but it is far enough from the city that there are plenty of rural and forested areas to explore. The tallest mountains within biking distance from the apartment at which I’m staying are especially fun to explore. Finding the trail-head to the top, staying oriented while hiking, and taking in the distant views at the top is an activity I’ve enjoyed multiple times in the last month. There’s a sense of triumph in “conquering a mountain.”

But it was on one of these excursions that I began to contemplate the landscape photography concept of vs. from. Is it not intrinsically better to take pictures of a subject rather than from a subject? It sure is rewarding to climb a mountain, but once I’m at the top, what is there to see? Only the smaller mountains; only things far, far away. It has happened over and over again. Once I find a fantastic, yet un-picturesque summit, I search for a “bigger and better” one, only to find exactly the same thing. In a sense, once I’ve conquered it, I’ve lost it.

You never know when the top of a mountain will provide both a fantastic and picturesque summit, so I think taking pictures both of and from any subject is best. But in the excitement of “conquering a mountain,” or “getting a better perspective,” or even, “breaking outside the box,” I must not forget to overlook the “lowly” spots, or even the spots that are inside the broken box.

Perhaps the next time I have a chance to do some exploration, I’ll climb the mountain next to the biggest one. 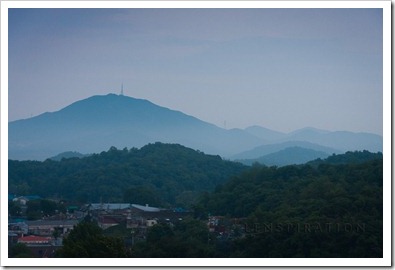 A picture of Sky Mountain, one of the tallest mountains within biking distance,  taken from our apartment window. 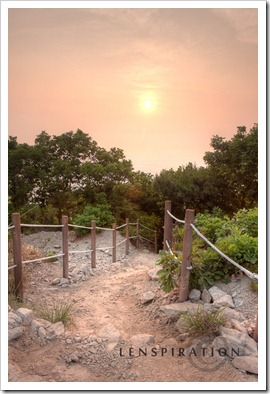 A picture from Sky Mountain that I took last week. Is it better than the first? Perhaps so, perhaps not; it all depends on what the viewer thinks. But one thing is sure, this picture doesn’t portray the same feelings as a mountain landscape.