After years of producing and selling honey on a small scale, my brother Michael is starting up a business to produce and sell honey on a much larger scale! Budding businesses like his are always in need of product images, so recently I’ve been taking some time to help him out with what I shall sheepishly attempt to compare to product photography. 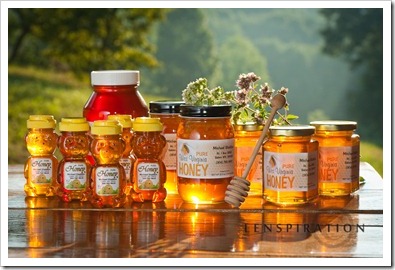 Here are the 6 steps we followed for getting the picture we wanted:

First we had to figure out what kind of environment we wanted to surround the honey. Did we want the pictures to look organic or West Virginian? Did we want it to look like it was taken at a picnic, or in a kitchen, or on a farm? There are all kinds of environments that will completely change the feeling of a picture, but we both really liked how a glass of golden honey is set aglow when the low, first-morning sunlight shines through it, so we chose an outdoor, natural environment to shoot the pictures.

Next we had to choose a location. Obviously, we had to shoot outside early in the morning. But where outside? We had a nice picnic table on the porch where the sun hit first thing in the morning, so we chose that as your location. But what about the foreground? Should we use rough-cut boards, a table-cloth, or leave the table uncovered? There are so many decisions to be made for stuff like this, but we decided the un-covered surface would help to add an element of quality to our natural environment.

Then we had to set up the arrangement and angle of perspective. Right as the sun began to shine on the table, we brought the honey outside and set it up on the table. I didn’t position the sun directly behind the jars because that was simply too bright and washed out the golden look we were going for. I also choose a low angle of perspective to make the jars of honey look big and close.

You might think that shooting outside doesn’t require any extra lighting, but when shooting into the sun, it really is required to fill in the shadows. I increased the power of my speedlite a bit and bounced it off a reflector on the left to add just enough light to make the labels readable. 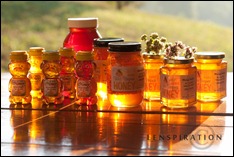 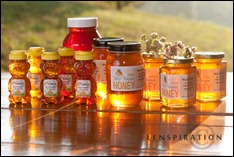 Left: without flash. Right: with bounced flash at +2/3 stop. 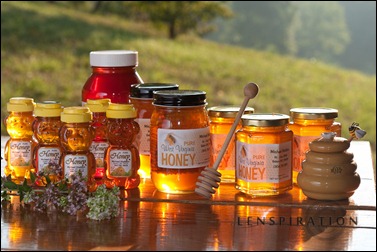 One of many arrangement variations

After downloading the 40 or so pictures from the shoot, I did some simple exposure tweaks to bring out the color, contrast, and dynamic range. I tried converting it to B&W, and though I think it looks cool, it fails to fulfill the purpose of why we took the picture. 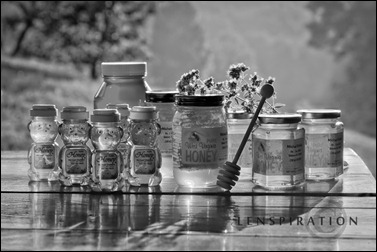 The black and white version that doesn’t really work.