Life Along the Parkway 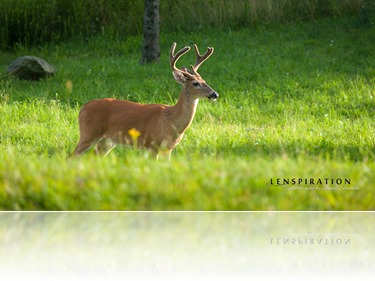 My brother Jonathan and I couldn’t help but stop and marvel at the beauty of God’s creation when we spotted this beautiful white-tail during our scouting excursion for CAPTURE North Carolina on the Blue Ridge Parkway earlier this month. With the side door of the mini-van open for maximum freedom to get the best shot, we slowly drove by a few times until the buck ran off into the woods with the rest of the small herd.

Shooting during the Golden Hour is arguably the best time to take pictures. But it is far from being the easiest. The only way to get the contrast I knew I needed for this subject was to utilize backlighting so that the body and antlers would be outlined in light. However, when the buck stepped out into the full sunlight, I began to wonder if the shot would turn out  because the direct sunlight reflecting in my lens caused the image to appear to have very little contrast overall. I did my best to block the most direct light with my hand (I don’t have a lens hood for my 70-200mm), but even the LCD screen showed that it was washed out. The deer didn’t stay in it’s picture perfect position for long, and it was gone before I could do anything else about it.

Then I began to wonder if the shutter speed had been fast enough. The buck only stopped a few times as it moved steadily onward toward the woods, and I didn’t feel like I was holding my 200mm very steadily with my one hand. . . .

I say all this because I want to emphasize the fact that I am apprehensive about practically every picture I take, and very seldom stop taking pictures before “the moment” is over. I am always on the pursuit for “an even better shot”. If one shot can be great, can there be an “even greater” shot? Keep your head and do the best you can while the moment lasts. But once it’s gone, don’t second guess yourself. You can’t do better than your best!