In Search of a Moon Rise

Remember the free book I wrote, Instinctively, on the 10 basic camera settings every photographer should know? 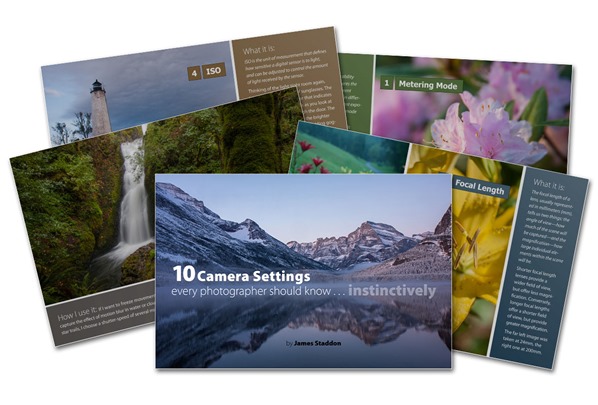 I wrote that last year in an attempt to help beginner photographers prepare for the more intense, hands-on instruction that they would receive at a CAPTURE or ACTION. It was also helpful for intermediate photographers as well, equipping them with simple ways to understand and explain the important camera controls that they may have only known as buttons on their cameras.

Well, there’s only so much that a 19 page ebook can explain. For the past month, I’ve been working hard on a comprehensive, 5-segment course that will take beginner photographers who don’t know anything at all about photography through the process of buying a camera, explaining the most important camera controls, and moving them on to a solid foundation in composition and post-processing workflow. Everything they need to prepare them for the in-depth training that they will receive at a CAPTURE or ACTION! And it’s more than for beginners too. My hope is that intermediate or even advanced photographers will also benefit from the processes and principles that the course follows and explains. The ebook is great, but it’s just the tip of the iceberg for a beginner photographer! (You can get it for free here when you subscribe to the Lenspiration updates.)

It’ll probably be another month or so before I’ll be able to launch the new course, but I’m really looking forward to it! I travel so much during the summer that winter is the only time of year that I can do it, so I’m dedicating every spare minute I have to it.

But that doesn’t mean I’ve stopped taking pictures. Quite on the contrary! Though January was rainy, February has been snowy, thankfully, and I’ve been able to take a few excursions out into the cold. Remember how I’ve been waiting to get a full-moon rise for several months now?

Well, a friend of mine told me about a cleared area that he knew of, high enough and clear enough to offer some descent views of the surrounding area. Of course, exploring a new place sounded like a great idea to me, so we set a date hoped for good weather.

It was extremely cold, windy, and snowy the day we drove and hiked the long, up-hill climb to the field on top of the mountain. The clouds were broken and moving quickly enough that I figured there might still be a good sunset. And that’s exactly what happened! Sort of. As sunset approached, the clouds broke where the sun was for just a few minutes, just enough to let it peak through and light up the clouds. And then it was over. Because I had a feeling that it was coming, I was able to position myself behind this large rock protruding above the sod to use as an anchor foreground subject. If the clouds had broken in another area of the sky, I think it was a shapely enough rock that I could have probably positioned myself on any side of it and still gotten an interesting picture. 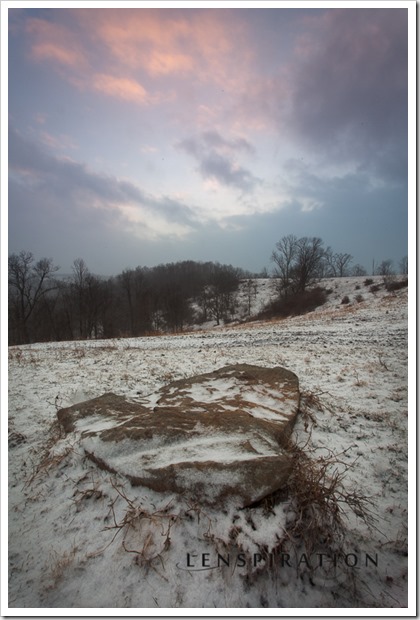 After that, the clouds thickened back up and it started snowing again. I knew there was no hope for a moon-rise, but as dusk fell, I figured I would at least try to look for another composition. The little knoll that comprised the highest point on the mountain intrigued me, so I walked down the hill a bit in order to completely cover up the horizon with the foreground hill. I knew this would give the impression of isolation and draw more attention to the very slight shape of the knoll. It took a few tries before I felt like I got something I liked, but the remains of some scraggly shrub on the left helped anchor the foreground a bit. Because it was getting so dark, I tried some multi-minute exposures using an ND filter to get the movement of the clouds, but the textures disappeared and the sky turned to slate before I could carry out the idea tastefully. At about this time, my fingers were freezing, I’m sure my feet were frost-bitten, and I was ready for some hot chocolate! And what do you know? When we went to thank the kind couple living in their cozy little farm house nestled in the valley, they had made up some hot chocolate special just for us, and what a homey chat we had. Gotta love West Virginia hospitality! 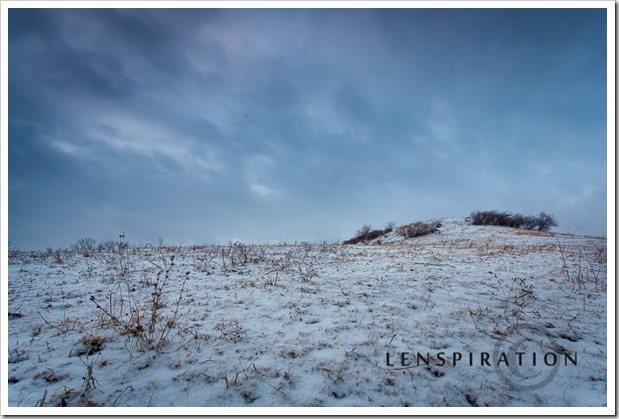 I only came away with two compositions from the entire excursion. But there were other things to take pictures of, so I guess I’ll have to wait till next time there’s a full-moon rise!