The Story of the Lens and the Speedlite

This is one of my favorite images from my brother’s wedding in Houston. It captures the emotion of the event perfectly; and the movement of the falling flower pedals adds just the perfect touch. However, despite the amount I planned for this event, only God could have set this one up. 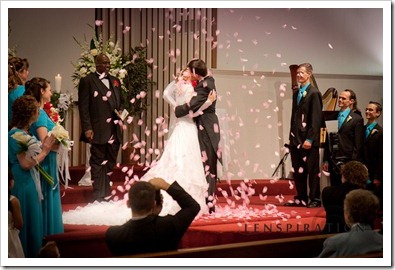 A week before the wedding, I purchased a lens and a speedlite on the same day, Friday. The lens was a 70-200mm f/4.0 L IS. The speedlite a 580EX II. Kerzdenn, brother of the bride and main photographer for the wedding, highly recommended I get the more powerful flash and I added the lens knowing that I would need a telephoto lens sooner or later.

The arrival date, Tuesday, was the same for both packages. Because I was leaving West Virginia on that day, I shipped them to Chicago so my brother, Daniel, could bring them down with him on Thursday. It’s wise to give a little time for padding, you know.

On Wednesday, I received the expected e-mail from Daniel about the packages. However, one thing was unexpected: only one package had arrived. I frantically searched the tracking information to see which package had not arrived on time. To my relief, it appeared that the lens was the late one. The flash was more important, so as long as Daniel brought that with him, I would be fine.

Late Thursday night, Daniel brought me the package. It was exciting to open, but I was quite surprised when I found that it was not the flash, but the lens. Of course the lens was great, but what had happened to the flash!

After this discovery, I immediately acted on my emergency plan. A fellow from Chicago, Barak, was flying down Saturday morning, the day of the wedding. I shot him an e-mail asking him to diligently search for the late package and bring it with him on Saturday. It was my last ditch effort.

Friday swept by quickly. During the rehearsal, I realized more and more that my 430EX simply wasn’t going to make the cut, even with the camera set to 800 ISO. I was comforted by the thought that the more powerful flash would arrive the next day. An e-mail from Barak confirmed my solace: the package had been found; Barak was bringing it with him on the plane.

But alas, I could not even count on my own emergency plan. Saturday morning came and went. 2:00, the beginning of the ceremony, came and went also. The plane had been delayed. The flash arrived 3 minutes before the ceremony ended.

Despite the unfortunate circumstances, I shot as best I knew how for the ceremony, often resorting to my wide angle, f/2.8 17-55mm without flash. And that’s how I ended up with the above photo. It is the only way I could have captured the movement of the falling flower petals; I would never have thought to shoot at 1/30th of a second with the speedlite!

Looking back, I see that this is only one of many hidden blessings God gave me as I lived through the story of the lens and the speedlite. I am learning to never give up. God will work all things together for good to them that love Him—those who fulfilling His purposes.

You can view this album for more pictures of the wedding.