About the 2012 Calendar: September 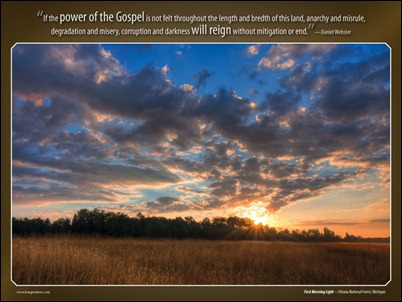 It isn’t every morning that the sky is scattered with gold-lined clouds broken by colorful rays of warm sunlight. I was at the Northwoods Conference Center in the Ottawa National Forest for almost an entire week and this was the only sunrise of it’s rank in splendor.

The hardest part of taking the picture was probably getting out of bed. It was late going to bed the night before and, being in the summer, the sunrise was early. But when I woke up and saw the cloud formations in the sky before the sun rose, it was enough motivation to get me up and out the door.

The second hardest thing was enduring the mosquitos. I was surprised that there were so many out so early. But I guess time of day doesn’t matter to a mosquito, and perhaps the chest-high grass and stagnate pond a stones throw away were not much help either.

Another problem was the super high contrast between the bright sky and the dark foreground. I handled this by using a tripod to take two different pictures, one exposed for the sky, the other exposed for the foreground, and merged them together in Photoshop later.

Reaching a goal by overcoming obstacles one at a time is something we must do every day. Faint not, for though the outward man perish, yet the inward man is renewed day by day. Be not overcome of evil, but overcome evil with good. This is the message behind one of only 12 images used in Lenspiration’s 2012 Calendar, now available for purchase online at Lenspiration.com.