How to Make a Cabin Cozy Part I

With much planning and little shooting over the past few weeks, I haven’t had much to post. So I guess I’ll post a little project I was working on just for fun the other day. 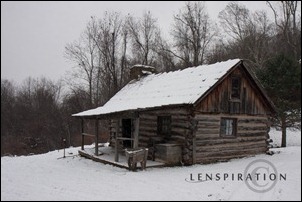 I’m working on designing a calendar for a local heritage site called Fort New Salem. It’s an awesome little town of old buildings! The other day, when it snowed for the first time in a long time, I drove over to the fort to take some pictures for the calendar. As you can see in the raw, unedited image above, it was a pretty regular winter day. Nothing special about it really, and when the sun did pop out every-once-in-a-long-while, it wasn’t bright enough to make anything look pretty. So I went home and popped the pictures into Photoshop. And look at the transformation! 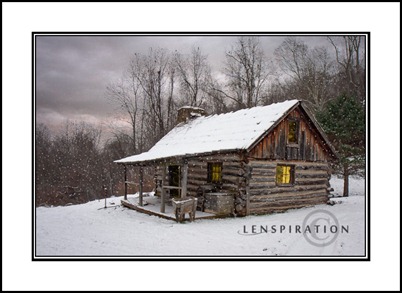 Everything you see here is really quite simple to do. After brightening the picture up a bit in Lightroom, let me show you what I did in Photoshop to add drama to the sky, light in the windows, snow falling outside, and snow clinging to the forest branches.

1. Adding drama to the sky 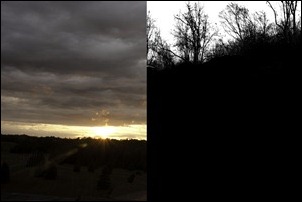 Second, I selected the sky. This wasn’t hard because it is basically all one light value. In the Channels pallet, I selected the channel that had the greatest contrast, duplicated it, increased contrast using Levels, pained black over all the white areas I didn’t want to be selected (ie. the snow on the cabin roof), and then Ctrl+clicked on the edited channel to load the selection.

Thirdly, back in my Layers pallet, I created a vector mask from my selection over the cloud layer. Though tacky-looking at this stage, you can now see the new dramatic sky over the cabin. 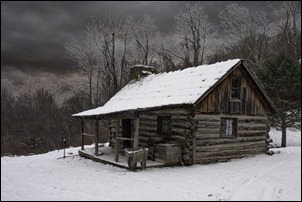 Now, all we have to do is blend the trees back into the sky. After trying various things, I found that setting the cloud layer to 70% Opacity and changing the Blend Mode to Hard Light, made it not look too shabby! 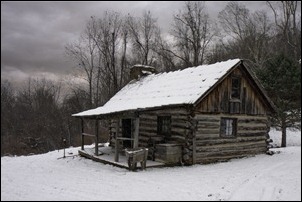 There’s still a lot more to add! In my next post, we’ll add lights in the windows . . .