The Technique of Forced Perspective

Went through some pictures today from my trip out to the West Coast in September! I posted some things earlier about southern California, but that was really just the first leg of my journey.  My real purpose for traveling from Los Angeles to Sacramento by car was to stop in at Yosemite. I had never been there before, and though it certainly is a “valley full of icons”, I must say I was impressed! 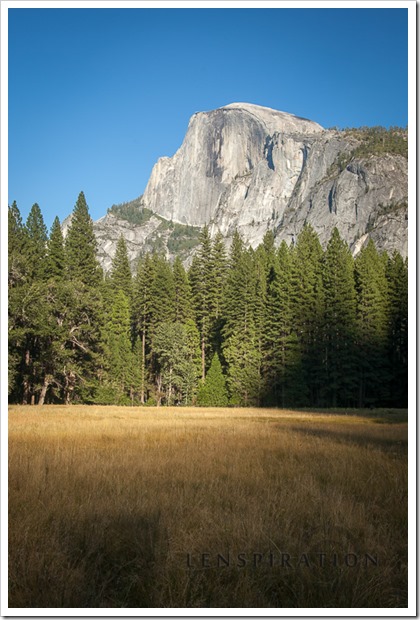 I learned a lot of things in Yosemite. First of all, it’s a big park! No wonder people say they could spend weeks on end without seeing it all. The Yosemite Valley is only one small part of the vast wilderness of incredible high-country just waiting to be photographed.

Second, I discovered first hand why September is not that busy of a month to visit. There’s no water for the waterfalls! I looked and looked and didn’t see anything until I realized the dark sections of rock in certain areas were the actual locations of part-time mighty Yosemite and Bridal Vale Falls.

Third, it’s hard to find a place to spend the night in Yosemite without planning ahead. I had to drive over an hour both nights I was there to get to a camping area where there were still some first-come first-serve campsites open. And that was in late September!

There were a million other things I learned, but there was also the joy of just relaxing for a few days to take in the views and practice various techniques I’ve been learning. One technique is called “Forced Perspective”. 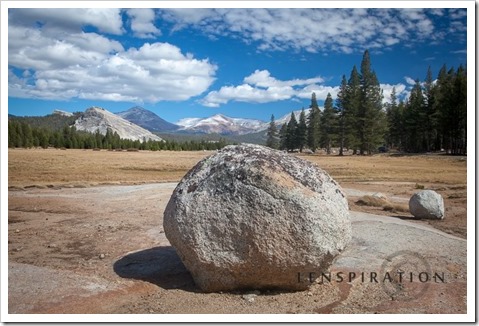 Looks like a pretty big boulder, eh? It appears that it could be about chest high, for me at least. Now look at the next picture. Same two “boulders”, just standing much further away. Waist high, at most, right? 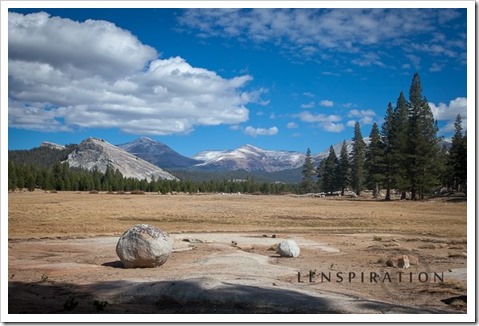 Both images have their appeal, but the first one has a much greater illusion of depth. That’s because I forced the foreground object to appear larger than it really is by simply being in very close proximity to it when I shot the picture. Though the mountains are basically the same size in both shots, the larger boulder makes it feel like there is something very close while the mountains are very far away.

When shooting for greater depth like this, just be careful that you don’t zoom out too far when you are including foreground objects; because of background scale, your stunning background may appear too small to appreciate.