Finally! The Moonset I’ve Been Waiting For!

The day had finally come. The day I had been waiting for since last November!

Back in November, we were having a discussion on moon photography on the Forums. As part of the discussion, we discussed how to overcome the typical problem of moon exposure, and how to exposure for the moon and foreground at the same time without having the moon completely blown out or the foreground completely underexposed.

In that thread, Any Tips for Moon Photography?, I suggest two possibilities of overcoming that problem. First, simulate double exposure using Photoshop. But that is so fake and completely takes the thrill out of moon photography, so I wanted to explore authentic ways of doing it and came up with this conclusion:

There are slivers of time around the full moon where you can include the natural moon in a landscape image while still retaining detail in both moon and sky. I do not know exactly when those times are, I’m still experimenting, but I would trust what Royce Blair says in his helpful article Into The Night Photography. His conclusion on the slivers of time you can shoot this are: “1. The night before the full moon, the moon rises just a few minutes before the sun sets; and 2. the morning of the full moon, the moon sets just before the sun is starting to rise. During these two periods, there is just enough ambient light from the setting and rising sun to give detail to the surrounding landscape — otherwise, it is too dark, and the contrast range is too great to record anything but blackness around the moon.”

So, since November, I’ve been waiting for a moonset or moonrise where the conditions were conducive to trying this out. And there are a lot of conditions! Schedule, cloud cover, sun/moon rise/set times, location, transportation and surroundings are the main ones.

Finally, on March 6, all the conditions lined up perfectly. A deep snow fell on the 5th (deep snows aren’t common in WV) making for excellent foreground material, as I mentioned in my last post, 4-Wheeler Ride of a Lifetime. The forecast indicated clear skies in the morning. The sun was going to rise at 6:48am, the moon was going to set at 7:04am, providing 16min when they would both be in the sky at the same time (that is, if we were in Kansas; the hills alter this calculation here in WV). I researched and pulled from previous scouting excursions to decide on a location. My friend Justin was willing to take me out to that location (inaccessible by vehicle due to the snow). And even though I had many other things in my schedule for that day, they all suddenly became second priority! 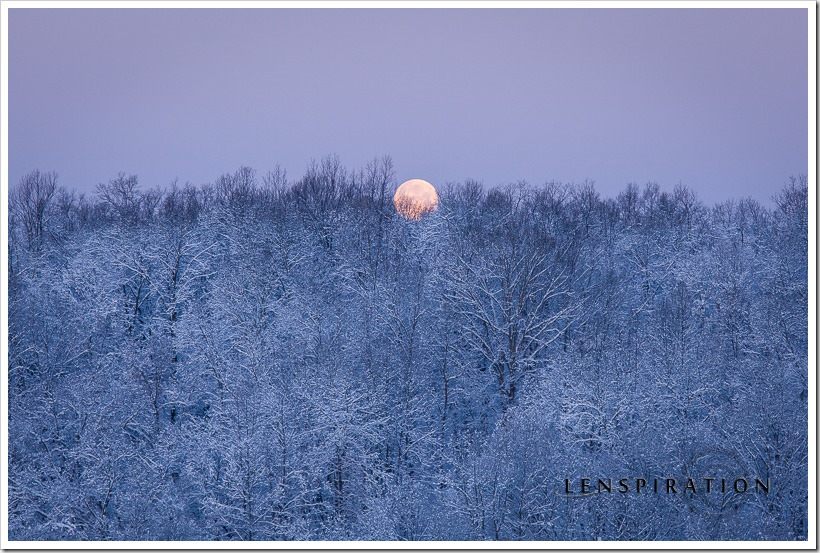 Well, not all that impressive, eh? There was really nothing all that dynamic about the pictures I took that morning. There was a lot to work on in terms of the surrounding elements. But one thing was for sure, I had to start somewhere, and it was the first step in many for gathering experience in how the moon and sun relate to each other. Plus, much of the fun of photography is the anticipation! Now that I’ve got my feet wet, I see how much more there is to learn. So I’m looking forward to seeing what the weather and my schedule will be like next weekend! 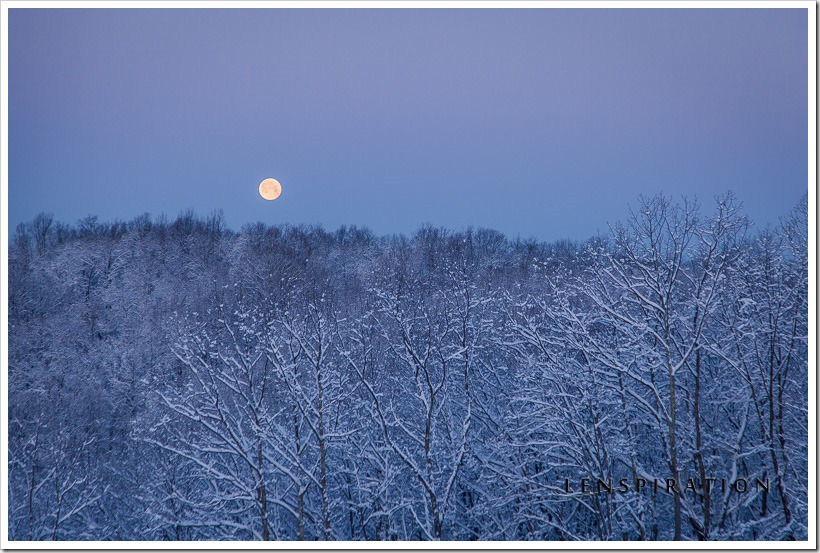 This shot was taken about 5 minutes before the first one, and about 7 minutes before sunrise. I was amazed at how dark it still was. You could certainly tell the sun was coming up in the east, but I was certainly “underexposing” to make sure I got the detail in the moon, making the foreground appear mysteriously dim.

Another factor that played into not quite getting the kind of exposure range that I was expecting was: even though I was at a fairly high altitude, I wasn’t high enough. The mountains around here are all fairly at the same level at their “peaks” and it’s hard to get high enough to actually see over the ridges to an actual horizon. The sun didn’t even show itself until 7:01, 13 full minutes after the official sunrise.

There were several other things I learned too by just “doing it.” It’s amazing how quickly the moon moves when you actually go to compose it. Precision in focusing becomes an issue too, as sharpness of the moon in the background is as important as sharpness in the elements in the foreground. For this shot of deer tracks in the snow taken about 15 minutes before sunrise, I should really have resorted to focus-stacking: 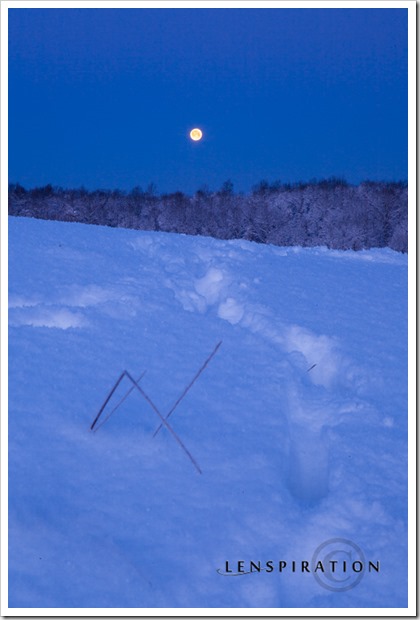 At any rate, it was a very fun excursion despite it being so cold (like, 0 degrees). Perhaps it was the moonset I was waiting for, but it doesn’t mean that it will be the last one!