How to Photograph an Auditorium Full of People

Have you ever been asked to shoot an assignment that you didn’t quite feel prepared for?

A few years ago, I felt this way when I was first asked to take the group shot of an auditorium chuck full of people at the Big Sandy Family Conference. Now, after several years of taking them, I feel much more prepared for shooting this kind of assignment then I ever have before. Let me share what I have found to work well for me when shooting large audiences, one step at a time.

You would think that shooting with the widest possible focal length would be my first choice. Like 16mm, or maybe even fisheye, to get the entire audience in one shot. However, I prefer to take multiple images and stich them together in a panorama. This reduces a lot of distortion and increases overall image quality which are both very important things, especially when photographing people. I chose my 24-105mm lens and, for this audience, actually zoomed in to somewhere around 34mm. I wanted plenty of room above and below the audience, but not so much that would make the audience appear tiny.

I also chose my “fastest” lens, meaning the lens with the widest aperture. F/1.8 would have been awesome, but I don’t have a lens with such a wide aperture. All I have is f/4 lenses, so this makes it challenging, but as you’ll see later, I was still able to manage.

As I waited behind stage for them to call me up, I set my camera up. Because it was even lighting over the audience, I went to Manual Mode. I set the Aperture to as wide as it could go (f/4), set the shutter speed to as slow as I figured I could hand-hold the camera without creating camera-shake blur (in my case, with IS, I felt I could shoot at 1/25th of a second with a very steady hand), and then chose an ISO that was as low as possible but as high as necessary to create an exposure that was underexposed by about 1 stop (in this situation I started with 1600). I also double checked that I was shooting full-size RAW, was using Auto White Balance, had removed filters on the lens, had plenty of battery life, had an empty memory card and felt good about the rest of my camera settings. Having complete control over all the camera settings is vital for staying cool in high-pressure shooting!

When called on stage, there are several things that happen all at once that were set to go in motion ahead of time. A song leader led the audience in singing (preferably with songs that have lots of long “E”s in it, like “Jesus” instead of “OY”s, like “joy”, so that the facial expressions are more pleasant.) A few people went out into the audience to ask folks to move in toward the center, fill in empty areas, or fill up the front rows. Someone else brought out a ladder to set in the middle of the stage. The lights over the auditorium turned on as bright as they could go while the stage lights dimmed to a minimum to reduce lens flare. I climbed up on the ladder and took a few test shots to make sure my settings were accurate. In this case, I had to hitch my ISO up to 2500 to get enough light. That auditorium was dark!

Once everything was in place, I very carefully took two or three panoramic sequences. Sometimes I’ll do this at varying levels on the ladder. The higher the better so you can see more faces. I have shot both vertically and horizontally in preparation for a panorama, and have found that vertical is probably the best the way to go. However, I wanted to experiment with horizontal this time, and would say it worked out just fine. I think it best to review the pictures after taking each sequence, just to make sure none of the pictures are blurry. I work methodically and oh, it feels like I’m up on the ladder for ever! But in reality it’s usually only a matter of minutes. The entire operation this time only took 5 and a half minutes. This was actually a little longer than normal, so I took the opportunity to snag a few unique shots that would otherwise be impossible to take. That was fun, and wish I had thought to take other shots like it sooner! 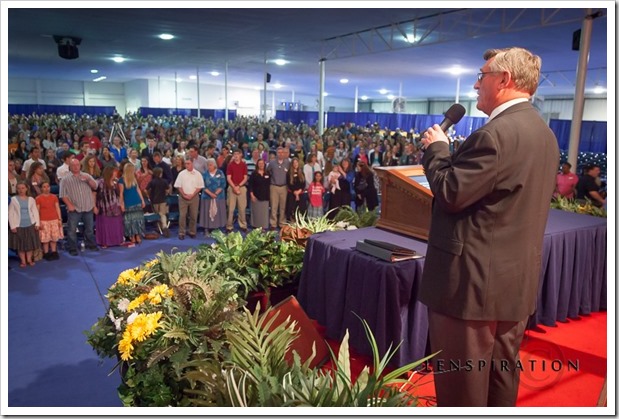 Back behind stage, I can now import the pictures into Lightroom and see which sequence was the best in terms of sharpness, brightness and audience expression. I won’t be using the pictures for anything other than for this one single panorama, so it doesn’t take long to find the best sequence.

6. Editing the individual images in the panoramic sequence

When I’ve chosen a sequence, I start with the very first shot and edit it to perfection. Because I shot in Manual, I can synchronize the global changes to the other shots in the sequence. As you can see, I brightened up the picture quite a bit! This is only possible to do, while still retaining quality, if you shoot in full-size RAW. I knew the pictures were dark and grainy when I took them, but I had pushed the camera to it’s limits. I never want to rely on post processing to “save” a picture, but I certainly use the editing power of Lightroom whenever it’s needed.

Here’s one of the shots in the sequence I hose. Looks pretty bad, eh? 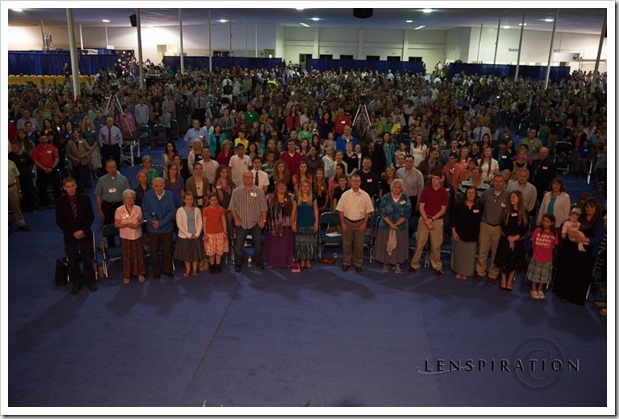 Here are the Basic adjustments I made comparing Before and After at a 100% preview. No it’s not the best quality picture in the world, but when viewing the final product, you will never be able to tell. 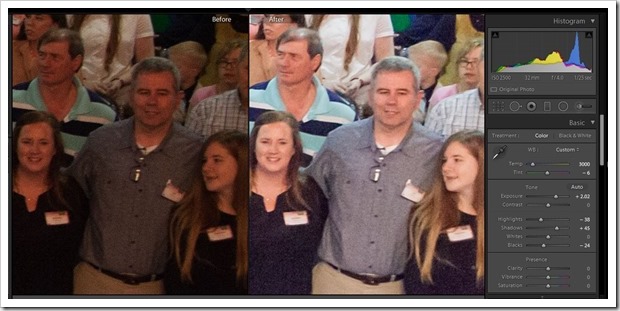 And here are the Details and Lens Corrections adjustments I made, still at 100% preview. As you can see, the sharpening and noise corrections in Lightroom do help a lot.

7. Stitch the panorama together

Lightroom now has panorama stitching capability, but I didn’t have it installed on my computer at the time so I went to Photoshop. In the past, I have manually stitched the pictures together and it takes a long time! So I figured I would try Photoshop’s automatic stitching capability. Thankfully, Photoshop isn’t the only program out that that can stitch panoramas together automatically for you, but I use Photoshop because I have it. I am not an expert in this area, so I just experimented with different settings until I discovered that “Auto” Layout produced the best results.

These are the four edited images that I sent to Photoshop to stitch together: 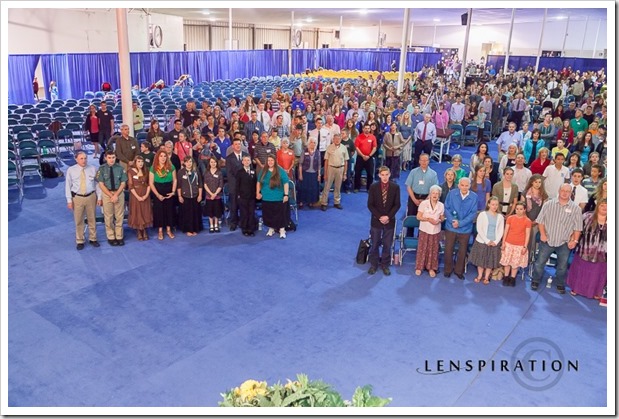 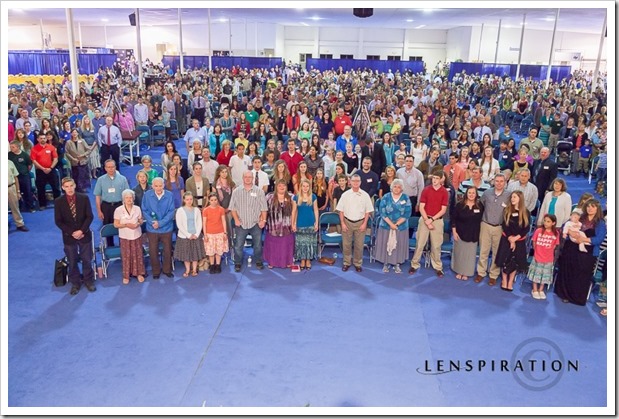 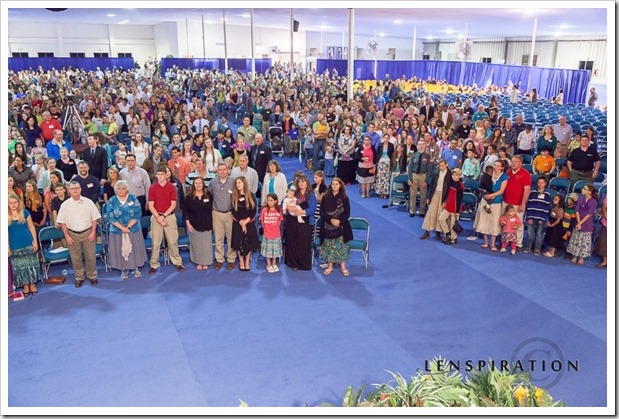 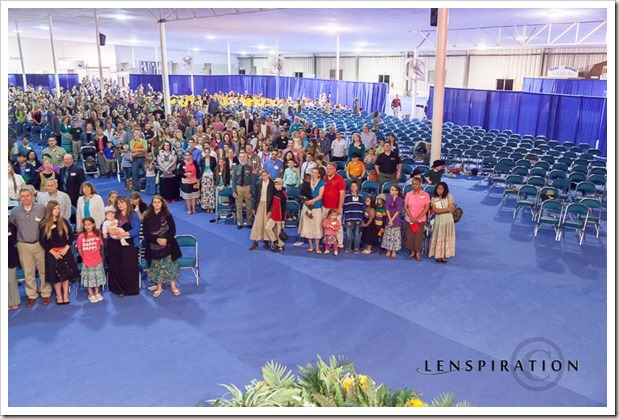 Before submitting the assignment, I extended the floor a bit using Photoshop’s perspective clone tool to make room for some text, and then made some minor tweaks and adjustments to decrease clutter. Adding a semi-transparent, white-to-transparent gradient from the top really helped with this.

So, there you have it! Now you know how to take pictures of a big auditorium full of people!