Pic of the Month: February ‘11 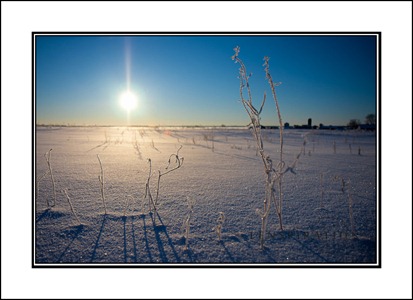 Have you ever considered that all your wonderful camera equipment is not much more than this: weeds? Both will eventually break down. One more quickly than the other, of course, but neither of them will last very long.

And why do I say this? To warn you first of expecting from equipment more than you should, and second, to beware of using a tripod in deep snow. Tripods, especially lightweight ones, do not hold up well against the atypical pressure incurred when the legs, fully extended and opened to a leg angle of 25 degree or more, are placed without appropriate caution into snow 20 or more inches deep. While still providing a degree of stability, this depth is enough to make the tripod literally “float” in the snow without actually resting on the ground. It’s the equivalent of a person doing a leg split; it induces incredible stress on the upper portion of the legs, more than a tripod was built to endure. In my case, this resulted in a snapped tripod leg lever after only two weeks of use.

As far as I know, to prohibit this from happening, one must open the legs less than 25 degrees or not fully extend them before placing them into the snow. However careful one may be, there will always be problems and evidences of break down. Give your equipment to God, be as careful as you can, and just expect misfortune along the way!