I was going through pictures today and came across two practically identical waterfall pictures I took last month at Bond Falls State Park, Michigan. Notice how the second picture looks so much better than the first one. Both were taken on a tripod only 26 seconds apart from each other on a partly cloudy day. Notice the differences between the two: 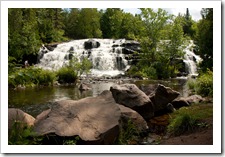 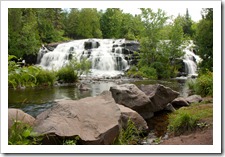 All exposure settings during capture (including exposure bias and focus point) and slight tweaks during post-processing are identical between the two pictures; that is, except for two things: the aperture and shutter speed. A = f/8.0 at 1/200 sec; B = f/22 at 1/10 sec.

Such a small change makes such a big difference. Not only is the waterfall smooth, but the overall impression of the image is smooth. No more shadows on the foreground rock, less contrast in the background trees,  and the foreground stream running off the to the left appears to be velvet.

My only regret: I wish I had been able to use a 2- or 3-stop Neutral Density Filter to make the shutter speed even slower. I wonder what it would have looked like then.