About the 2012 Calendar: January

Bridge Over the Ice 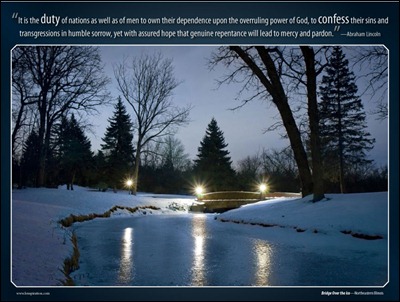 January 21, 2011 was a bitter cold evening. As I recall, the temperature hovered around 10 degrees. It was fairly clear, the moon was full and a nice blanket of snow covered the ground, so I ventured directly from my office into the cold with camera, tripod, and shutter release in hand. After about 20 minutes, I was thoroughly frozen and went back inside to thaw out and settled in for a late-night in the office.

But that’s when I got a call from my friend Brandon. He too loves photography and he must have seen the full moon as he was returning from work. Knowing how cold it was, I almost declined his invitation to spend some time outside taking pictures together, but I knew this was a rare opportunity, both in spending time with Brandon and in shooting snowy landscapes under a full moon.

The location we chose to shoot at was this quaint, little bridge on the campus where both Brandon and I worked. I liked the reflection of the lights on on the ice because it introduced warmth to a composition that would otherwise be completely frozen. I set up the tripod in such a way to get the camera fairly close to the ground, and then composed the shot to cause the curve of the left bank to draw your eye to the bridge. I used the shutter release to reduce vibration during the 20 second exposure.

The decision to make people higher priority than projects resulted in more than just the blessing of spending time with Brandon: that late-night photoshoot produced one of only 12 pictures chosen for Lenspiration’s 2012 Calendar, now available for purchase online at Lenspiration.com.