4 Differences Between an OK Image and a Great Image

I distinctly remember the feeling of awe that came over me as I drove into the valley where June Lake lay in the shadow of the south-central Sierra Nevada foothills. With just a short bit of time in the middle of the day to check it out, I wanted to see what the area was like. Reaching the shore, I took my time to enjoy the mountain scenery, the September breeze coming off the lake and the warm sun blazing overhead. I greeted an elderly couple enjoying the same setting over a picnic lunch on a large piece of driftwood on the pebbly shore. 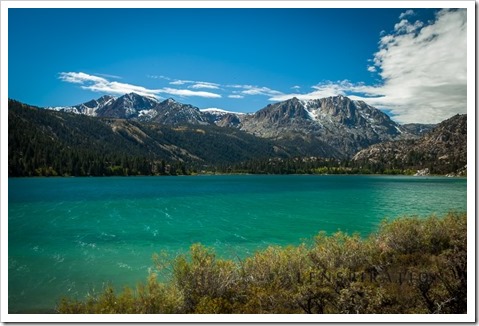 Yes, it was an enjoyable place to be (exact location), but going through my pictures now, there aren’t many worth processing. This shot above is really the only one that stands out to me from that location, but it still isn’t good enough to use as an example image for a project I am working on. And yet, just a few days after visiting June Lake, I took another shot of another lake that became one of the first to be added to my Top 25 favorites from 2013. Why? What’s the difference? What made the first shot “unusable” while the second shot took first place in my portfolio almost immediately? Here is a list of differences between the two images that give great insight into why the second image below works better than the first:

Look at the first image from June Lake. Where does your eye go? First to the mountain, right, then perhaps to the green water. But there’s nothing in the water to keep my eye moving around in the picture. It goes back to the mountain (or mountain range, perhaps) and, finding nothing else of more interest, it wanders off the image. Now look at the second image below. It’s a sunrise over Emerald Bay on Lake Tahoe, California (exact location). The first thing that catches my eye is the island, or perhaps the circle of water surrounding it. Then my eye jumps to the intense color in the sky where the sun is coming up. Then, after finding nothing of great interest in the abstract pink and purple clouds in the sky, it goes back down to the island and the circle of water. After circling the island again, my eye goes back to the intense color in the sky.  The island and the bay are of great visual interest, but it’s balanced with another element that feeds the eye with something else of interest, helping the eye to bounce back and forth, staying within the image. 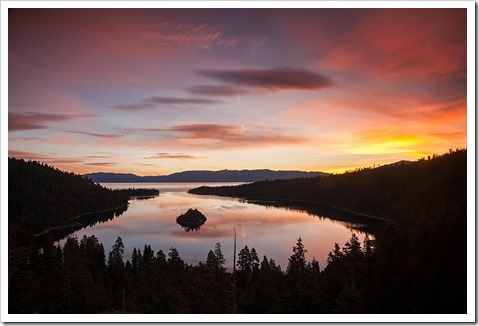 In the first picture, I’m not sure if the lake or the mountain is the main subject. The mountain is grabbing for my attention, but the color in the water is so vibrant. The mountain has greater “visual mass” but it’s subdued in the background, blending in with it’s surroundings. The lake also has visual mass, but there’s nothing of interest in it except for the color, and color in and of itself makes a poor subject. In contrast, the island in Emerald Bay stands out in stark contrast against the reflective water around it. I immediately know what it is and it anchors my eye in the picture. There’s something to come back to after my eye has journeyed through the rest of the picture looking at the other interesting elements. It’s a magnet that keeps my eye in the picture.

I tried to create depth at June Lake by adding the tangled shrubbery in the foreground. It helps, but it’s not enough. There’s nothing that really suggests that some ground is further away than any other ground in the image. Perhaps the pine trees decreasing in size from the lake shore to the base of the mountain could indicate this, but they are so far away and do not play an integral part of the composition that they are hardly noticed. The static knowledge that mountains are larger than shrubs is the only cue telling me that they are farther away, but that’s not what a photographer should rely on to create depth. In contrast, the second image has many cues that suggest depth. The pine trees in the foreground are very distinct and contrast in size very quickly with what the viewer knows are pine trees in the middle ground. Secondly, atmosphere between the foreground hills and background mountains give the distant objects a lighter color cuing depth in the viewers mind immediately. This, coupled with the multiple layers of lake and land give a much better sense of depth than the first image.

It’s obvious that these two pictures were taken at two totally different times of day. At June Lake, everything is flat; two-dimensional-looking due to the direction of light. There are no words to describe the advantages of being at Emerald Bay at a more visually interesting time of day. I about froze to death to get it, but coming away with a shot like this made it ultimately more enjoyable than relaxing on the shores of June Lake in the middle of the day. Time of day makes all the difference in the world.

I’m looking forward to covering these concepts in more depth during our day on Advanced Composition at CAPTURE Quebec later this month. Today is the last day to get the $50 Early Registration Discount, but registration will stay open until the class is full. But with only 1 spot left, I can’t guarantee how long that will be!