The Thoughts Behind the Shots

Here are a few images from the CAPTURE Alaska workshop which I’ve converted to desktop backgrounds. Their allusion of grandeur, energy, and steadfastness remind me of a verse I read yesterday: “The Lord reigneth, he is clothed with majesty; the Lord is clothed with strength, wherewith he hath girded himself: the world also is established, that it cannot be moved.” Can you guess what Psalm it’s from?

For the three shots, I’ll attempt to explain what was going through my head when I was taking them. Perhaps it will help you come out with some stunning shots next time you’re out at a scenic location. 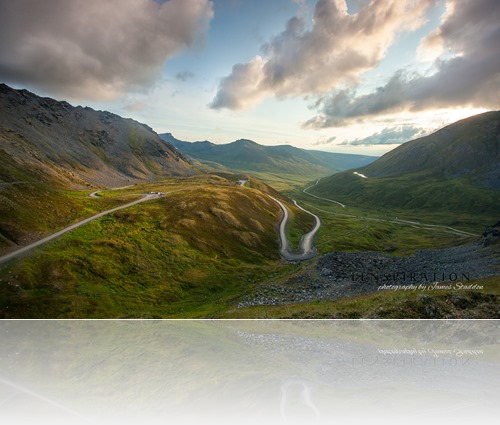 Time of day plays a huge part in a good picture. If I had come to this location in the middle of the day, sure, it would have been a pretty cool composition, but it wouldn’t have been dynamic. There would have been no color in the clouds, more of the sky would have been washed out, and the light on the foreground would have appeared to be flat. So, even though my thoughts about time of day were not specific to this composition, I had thought through what time I wanted to be there long before I arrived. And that’s how you have to think in landscape photography. But what I did think about this picture specifically was that I wanted to go ultra wide. I knew I needed to include as much of the road as possible so that the viewer would have a fun time following it through the frame, keeping in mind that I also needed to make sure the frame was filled with interesting things. I didn’t think of the “circle” of road in the center as being “catchy” while I was taking the picture; I was just looking down in the valley and knew it was an eye-catching scene. I look for things that catch my eye, photograph them, and then analyze them later to find out why it was eye-catching. In this shot, it has a lot to do with the loop in the road, a circle, a trap that the eye keeps coming back to that’s not strong enough to distract from the rest of the image, but is clear enough that it beckons you to keep coming back. 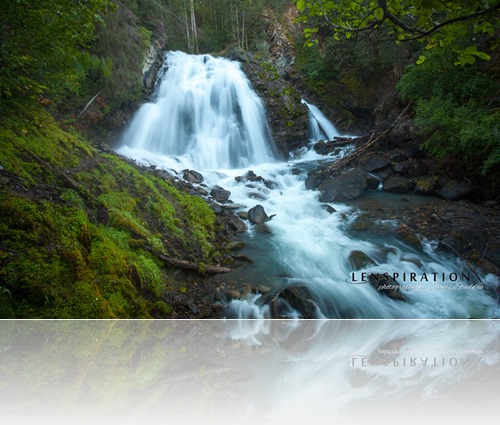 When I took this shot, I remember thinking: “I want to include as much of the moss on the hill as possible because I love the texture.” So I climbed around with the students to look for a good viewpoint that would include lots of the moss without interfering with the natural movement of the eye from the top of the falls to the right of the frame where the stream is flowing. At first, I went all the way down to the side of the stream (it really felt like a river, it was rushing so swiftly) but then because I was looking up at the falls, I was getting a lot of forest in the background which wasn’t nearly so appealing. It also included lots more water in the frame which I also didn’t like because it was, well, colorless. It wasn’t featureless, just without color. Perhaps good for B&W. But I wanted the green moss. So I climbed back up halfway where one of the students had shown me a shot that he had taken. I felt that was a much better vantage point for including the mossy bank along with the falls in it’s fullest view. 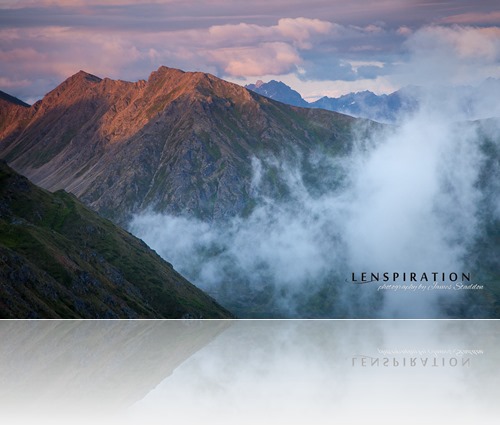 What got me thinking about this composition was the natural HDR effect that was happening that evening. Though the sun had set from my vantage point, it was still glowing red on the distant peaks. It was also shinning on the surreal clouds in the sky behind the mountains. But the light was so faint that it almost didn’t have much contrast to the areas of shadow. They sky wasn’t “bright” and the shadows weren’t very “dark”, so that’s what turned my attention this direction. I knew I could capture the illusion of high dynamic range simply because of the nature of the light. But then I didn’t want to just shoot a hunk of rock. I tried several different shots; zoomed in, zoomed out, included some foreground elements, etc. Nothing really was working. So I kinda forgot about it until this cloud moved in between the mountain and I. It created exactly the “extra element” I was looking for so I snapped several other shots playing around with more cloud, less cloud, until it moved on it’s merry way. I didn’t decide this was my favorite composition until I went to edit and process the pictures later on my computer.

The Threading the Pass wallpaper is free to download for those who are subscribed to the Latest from Lenspiration updates. You can view the last update here. To receive access to the other two wallpapers, along with the entire collection of Lenspiration wallpapers, make any purchase on the Lenspiration Store or register for a CAPTURE Workshop.