I didn’t post much about the snowstorm Jonas . . . I was really looking forward to getting some great shots, being in a new location and all when the storm hit, but after my first attempts of capturing the aftermath of the storm, I was so disappointed with the results that I questioned if it was even worth sorting through the pictures I had taken. Here’s what I mean:

One of the reasons for my initial excitement was the fact that the storm cleared right before the full moon, leaving clear skies and fresh snow for a perfect sunrise/moonset combination. Well, I must have stayed up too late the night before because I got up later than I was hoping and didn’t make it out to where I wanted to be when the moon actually set. I had no foreground to work with whatsoever, making it quite frustrating to find any compelling composition. The fact that the moon moves so quickly was of no comfort either. I found myself in the middle of a field with nothing to do but to zoom in as far as I could and shoot with the elements that just happened to be there. Even this shot is a heavy crop. 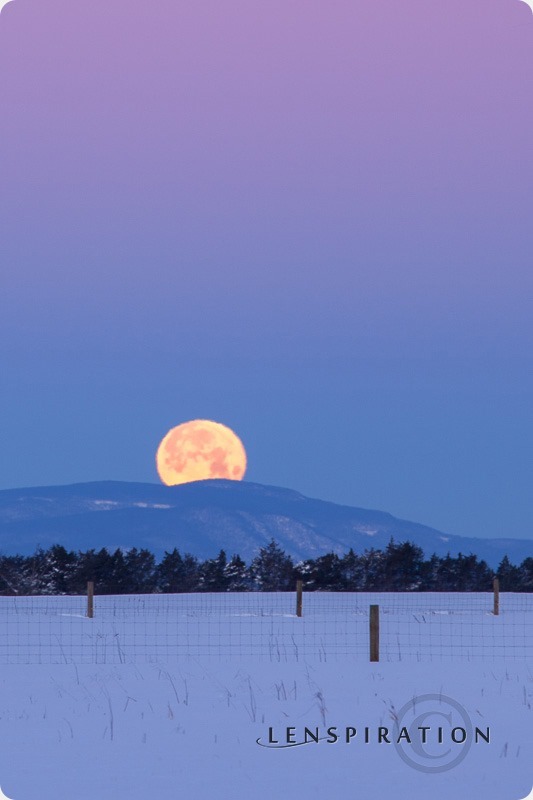 When the moon was gone, I turned my attention on the sunrise. There were lots of trees behind me, so I attempted to move to higher ground. One can’t go quickly in knee deep snow. And in attempting to cross a “frozen” stream, I fell in shin-deep which filled my boots with freezing water. Even then, it was a colorless sunrise and a cluttered field to work with. At least this time I found something to put in the foreground. But still, the light was so bad by the time I found an angle that worked, I had all but lost my enthusiasm for the morning shoot. 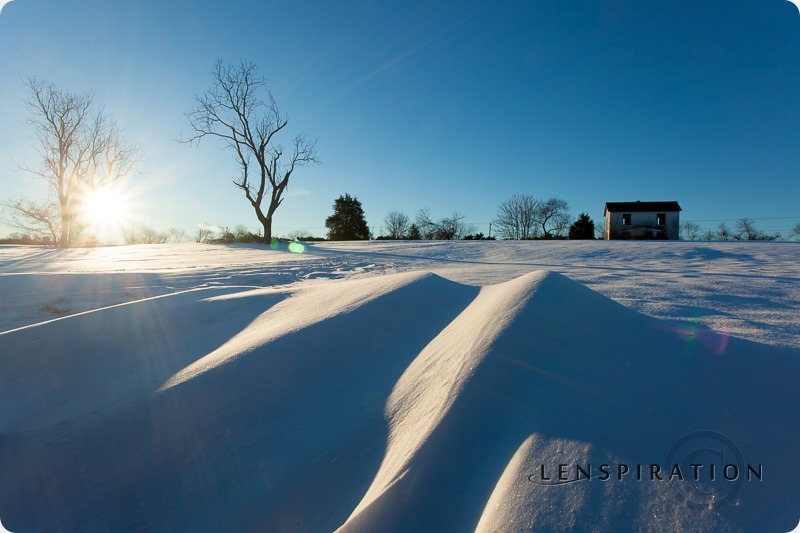 From there, I figured I’d try scouting “the bush” where I hoped to find some deep snow hanging on the boughs of some cedars in the area. Well, the wind pretty much blew that idea out of the water. The trees were really only covered half way up. Beyond that, their usual, scraggly self stood stark against the sky. 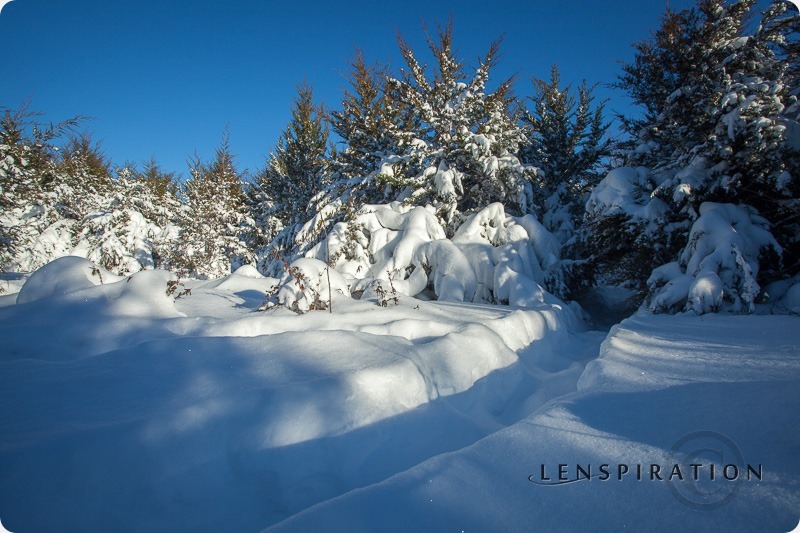 It was a tiring morning, trekking through all that snow, so when I went out for sunset in hopes for better light, I decided to stick to the road. About half an hour before sunset, I found a picturesque bend in the road that I thought would work well under the last few minutes of golden light on the landscape. I liked the silo in the background. 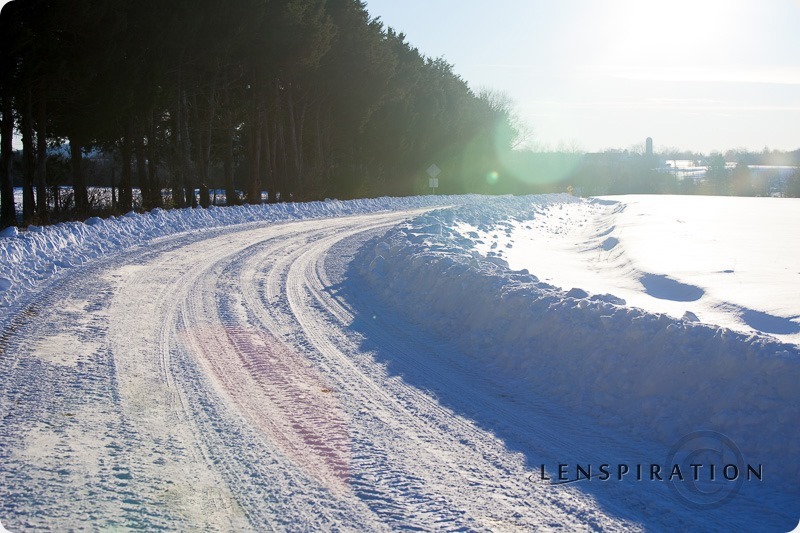 Well, patience is not my strong point, so with half an hour to kill, I took the risk of running up the road a bit further to an old church that I knew sat beside the road. As soon as I got there, I discovered it wasn’t worth the walk. 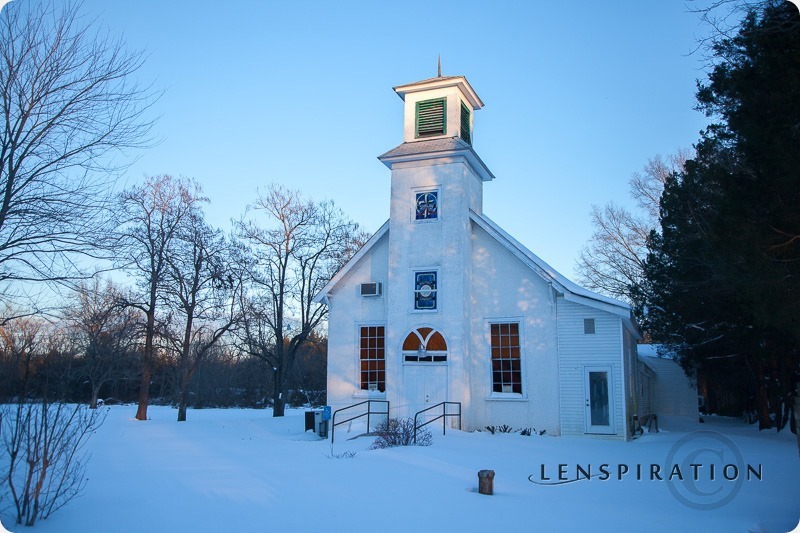 The light was fading fast. I hurried back toward the bend in the road. But along the way, I couldn’t help but notice the interesting scene that this gate created, just sitting there there all alone in the field. I stopped to snap a few shots. 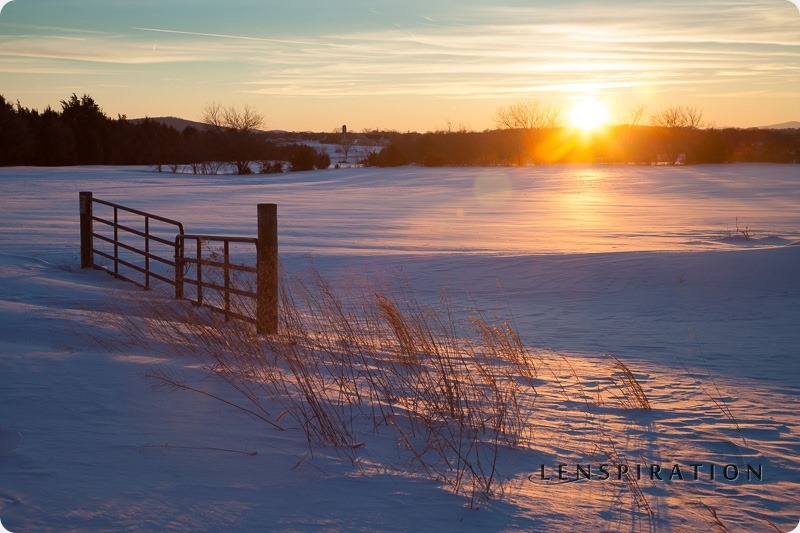 Sadly, I stopped too long. I debated and deliberated about whether this scene was actually better than the bend in the road. There just seemed to be better compositional elements here. The balance of elements, the texture, the light . . . but what of the subject? What is this gate doing just sitting out in the middle of nowhere? Lighting and composition don’t make a good picture by themselves. The subject—the gate—is not a strong enough subject to really make the picture worth looking at. Well, my decision that the scene wasn’t worth shooting was made too late. By the time I finally made it back to the bend in the road, the golden light on the landscape was gone. The sun had set, and all there was left to see was the glowing clouds in the sky. 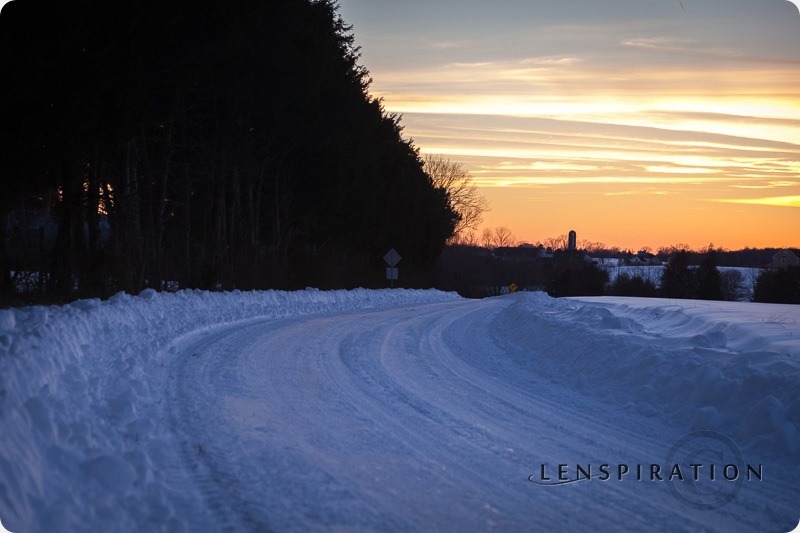 In my mind, it had been a very disappointing day. I had missed everything that I had envisioned capturing. The snowstorm after Jonas was going to be so epic . . . and this was all I got? My slothfulness and indecision had bourn their fruit. The fruit of snapshots.

But you know, life is the same way. All too often I start off a year with grand expectations, hopes and dreams of what I will accomplish that year. But then there’s the reality of sin. Because of sin, nothing runs perfectly in this world. Utopia will never exist here on earth. Only faith in and surrender to the will and ways of a sovereign God can bring anything better in life than disappointing “snapshots”. Only branches abiding in Christ will bear fruit. Fruit of real love, genuine joy, true humility and sanctified living. Regardless of how well I think I am reaching my goals in life, am I abiding in Christ? In the end, that will be the only thing that matters.

And so that is what I was meditating on on my way home in the dark. My joy does not have to be dependent on the circumstances.

And sometimes God give a second chance. He doesn’t have to, but sometimes He does. Even though the moon set a half hour later the next morning, He still allowed it to be clear enough to see the setting moon, only this time with sunlight on the hills. In my opinion, this shot is really the only shot worth sharing from the aftermath of the snowstorm Jonas. 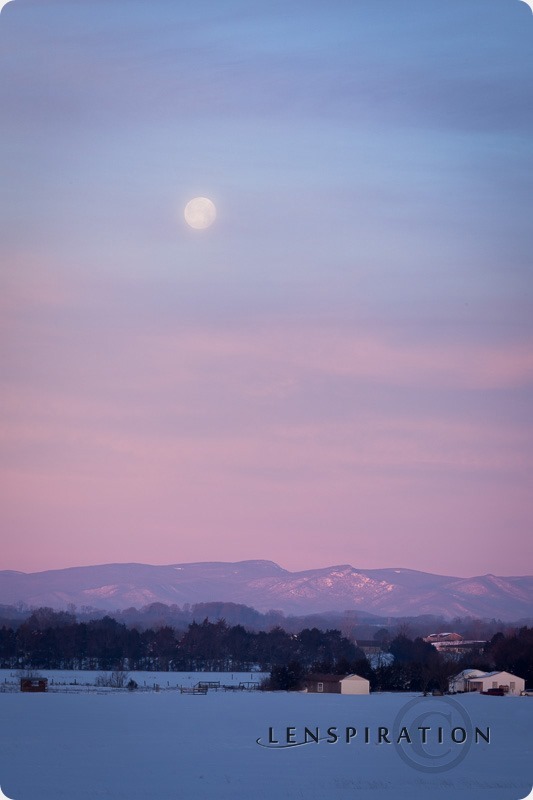 ‘Tis so sweet to trust in Jesus,
and to take him at his word;
just to rest upon his promise,
and to know, “Thus saith the Lord.”