How to Keep from Missing Good Opportunities for Good Pictures

My brother Jonathan and I drove down together from West Virginia to the Big Sandy Family Conference in Texas. It was quite the drive, but when I travel, I try to plan in some extra time to stop for sunrise or sunset pictures.

So, as we were driving along that first day, I started looking for potential places at which we could stop about an hour or so before sunset. The skies were clear so I couldn’t expect there to be a dramatic sunset, but I figured I could plan for be some nice golden hour light.

We were driving through the Appalachian mountains of southern Virginia and there were several points of interest along the way that seemed liked good candidates. Due to timing, we decided to stop at a place called Big Walker Mountain Overlook, about 15 minutes off the Interstate.

Doing my online scouting, I couldn’t find very many pictures of the place so I didn’t know if it would be worth the effort to go there, but there were little blurbs about it here and there about beautiful views from the parking lot of a country store, and even a quarter mile trail out to an overlook called Monster Rocks. It all sounded pretty interesting and seemed like a good spot for sunset.

And when we arrived at the beginning of the golden hour, we found that it was indeed a good place to stop! The main attraction was a 100 foot tower that you could pay to walk up to get 360 views of the surrounding area. However, it was closed, so I figured the next best thing was to hike up to Monster Rocks. A place named like that sounded like it would have good views. And probably better, more natural views and foreground elements to work with than the openings that were there in the parking lot.

Now, it is at this point in the story that I want to pause to throw in my tidbit of advice for how to keep from missing good opportunities for good pictures: if I’m not confident that what is ahead is really beautiful, and I’m currently standing at a spot that is perceived to be semi-beautiful, then it’s usually a better idea to photograph the semi-beautiful place first.

It’s hard to fight the hope that what’s ahead is surely better than where I currently am now, but if I don’t have any proof other than hope that what’s ahead is better, than I have found that it’s worth taking the time to take advantage of where I currently am now—what I know already exists to be beautiful—even if if it may seem to be less striking than what was originally hoped for. It’s the whole concept of “the grass is greener on the other side of the fence.” I have missed a lot of good opportunities for beautiful pictures because I was greedily looking for something better than what I already had.

So, back to the story, this is what I was presented with at the Big Walker Mountain Overlook parking lot. There were definitely opportunities where I was, but then there was this tantalizing idea that surely it was better out at Monster Rocks.

Well, this time, I fought the urge to set out on the hike immediately, and went down to a little platform at the first overlook to shoot a few shots first. There really was something that caught my eye here at this scene, and I figured it would be better to risk missing what I wasn’t confident existed at Monster Rocks. 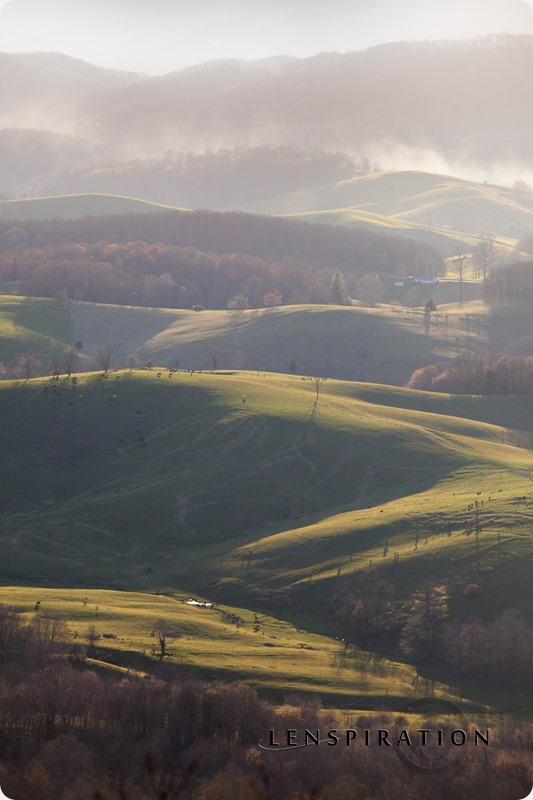 Then I hiked out to Monster Rocks. I arrived in good time still, thankfully, but instead of the grand vista that I was expecting, it felt more like a little “hole in the wall” sort of place. The angle on the rolling green fields below just wasn’t the same. 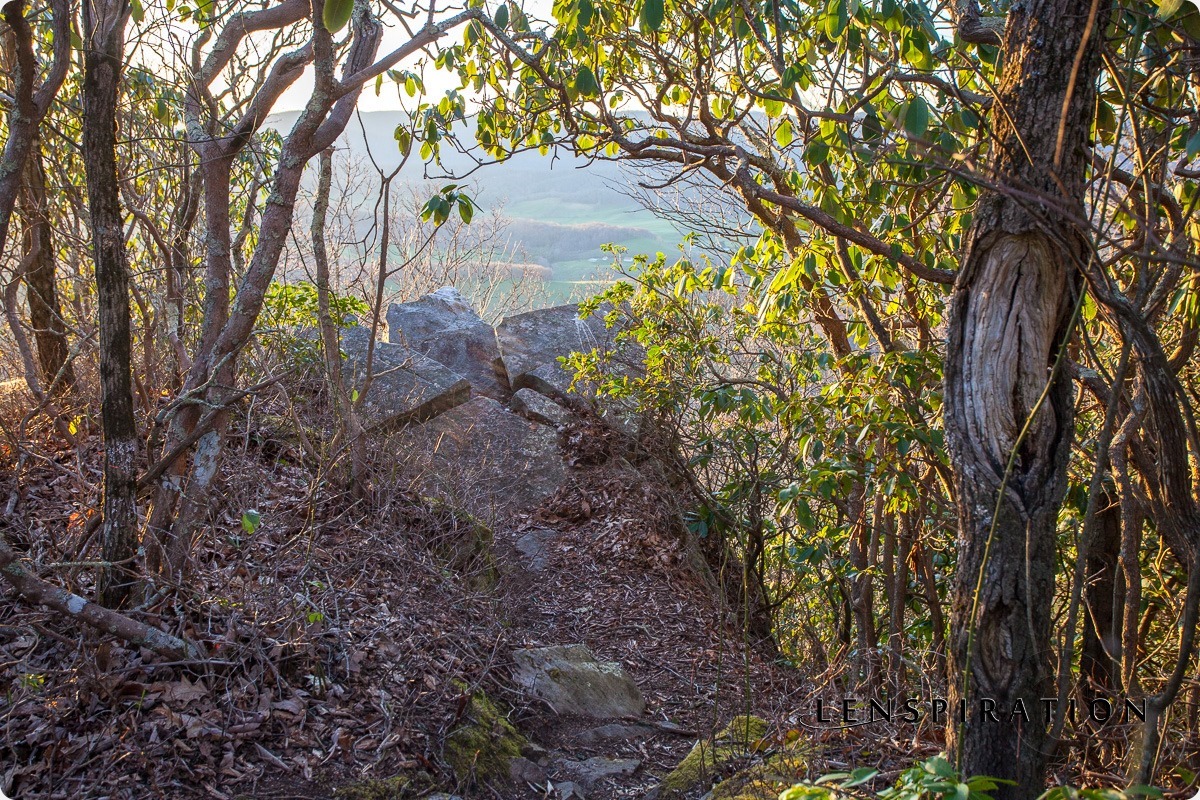 So, even though I did shoot from Monster Rocks to get the best shot I could of the sun dipping below the distant mountains, I was glad that I had taken the time to photograph the greener grass on my own side of the fence first. And this is the principle behind how to keep from missing good opportunities for good pictures. Learn self-control, and receive creatively the opportunities that God has already placed in your path. 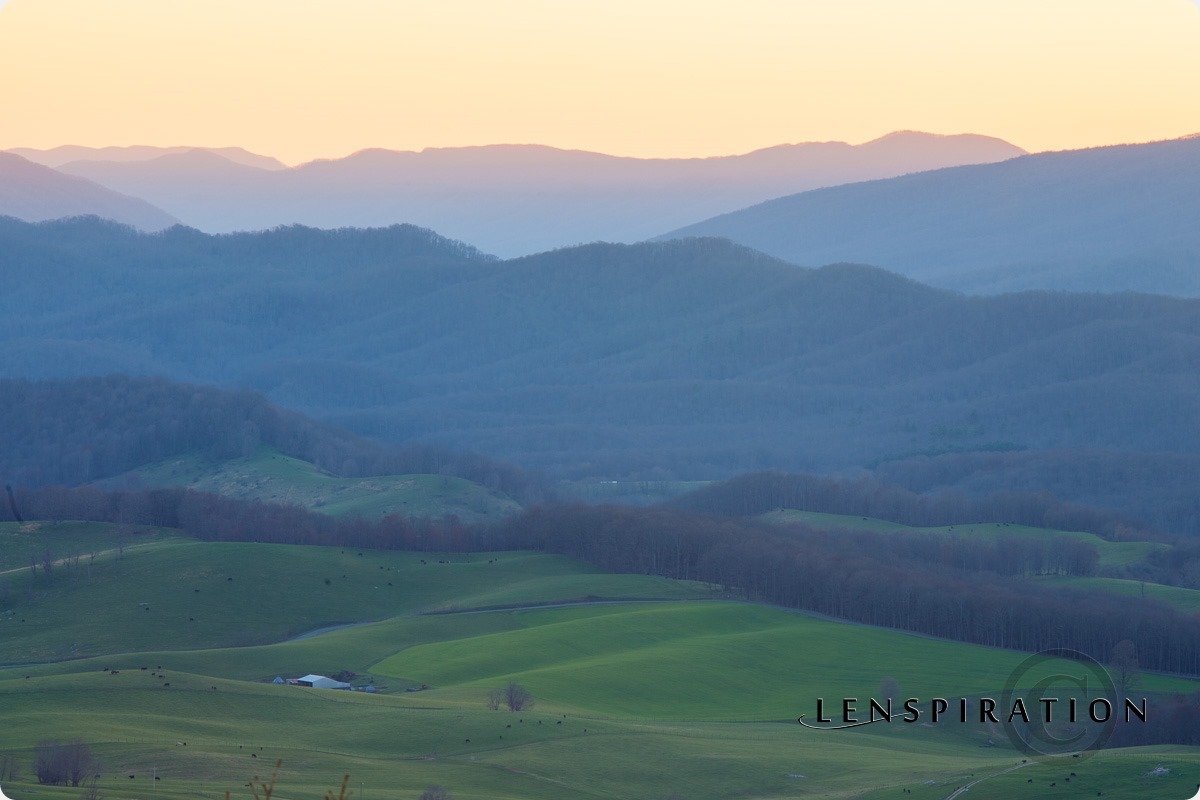