5 Tips For Shooting Before or After Peak Color

The autumn foliage is just about gone where I’m from here in West Virginia, but there is still plenty of color to shoot . . . especially if you can keep the following tips in mind! The autumn foliage doesn’t have to be peak to get awesome pictures . . .

On the way to church on a recent Sunday morning, I spied a little marsh by the side of the road. As a whole, it wasn’t anything all that pretty to look at but it did have some brightly colored trees on the far side. The next morning, I dove out there really quick to see if I could find any interesting captures. It just so happened that there was ice on the fringes of the water, so I laid or squatted down until the color reflected in the ice. It was fascinating! In general, due to the height in contrast, reflections in either water or ice will appear more saturated than the actual source of the color.

[How to Photograph Tack Sharp Reflections – Another tip for better photos of reflections!] 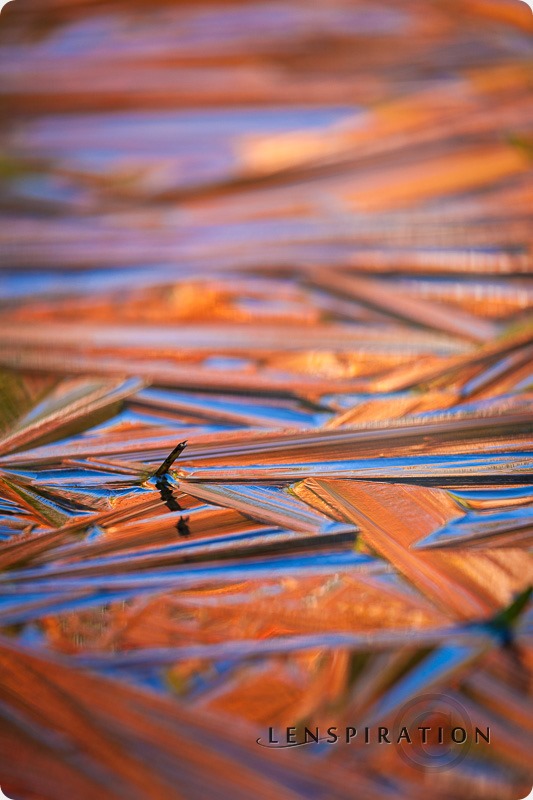 “Autumn Bokeh” . . . it’s a term I just recently ran across on someone else’s blog, but when I heard it, it resonated with me as exactly what I try to do sometimes. If what’s colorful isn’t interesting, focus on something closer and blur the color to texture! Oh, how pleasing that autumn bokeh texture looks. 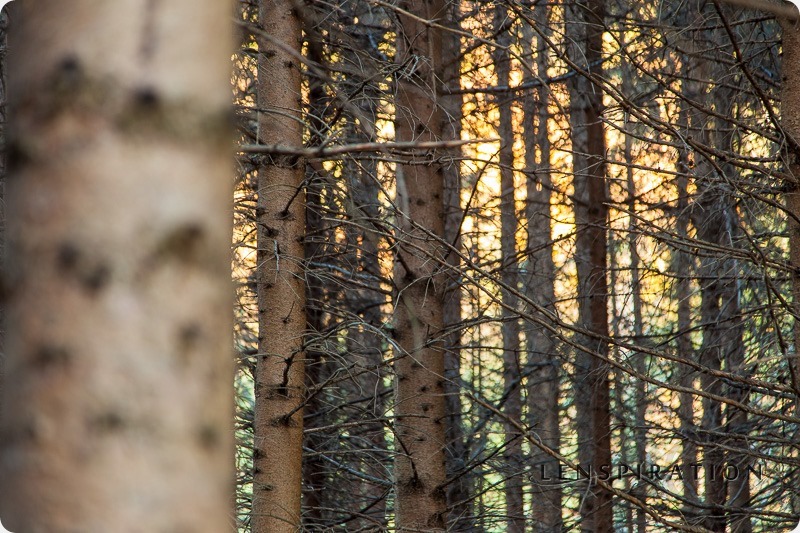 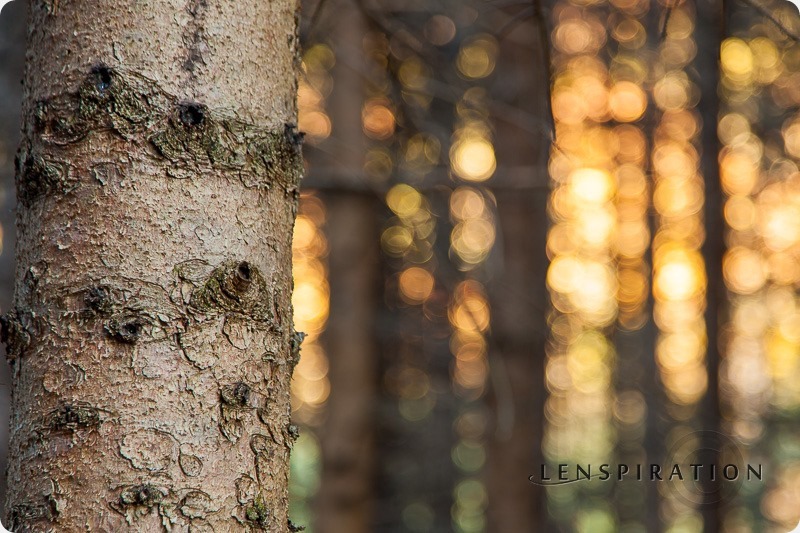 3. Only Include What’s Colorful in Your Shot

If I look out the window and don’t see any color, I am less likely to go out and take pictures. Seeing color inspires me to shoot, so when I don’t see much, I usually don’t end up shooting much. But this is because I think too much in terms of “the grand landscape”. It’s only very seldom that I have the privilege of being at an epic landscape location at peak color, though, and even then, very seldom is every single tree on every single hill around me going to be breath-taking brilliant orange!

So, don’t try to include the entire, grand landscape every time. Just focus in on and include only what is colorful.

Take a look at the following shot, a quintessential New England autumn portrait. Look like there’s much green around? You’d be surprised. Seriously, I was bemoaning the lack of peak color on that mid-October day in Vermont as I traveled some back-roads in search of “the perfect picture”. But when I saw this one tree all colorful like in close proximity to this nice little barn, I knew I had something to work with. Though green was surrounding me, I filled the foreground with fallen yellow leaves to cover the green grass and it just so happened that the few humps of hills in the background were farther along than most of the other hillsides I saw that day. You don’t have to be swimming in an atmosphere of golden light to capture golden pictures. Just shoot what’s golden, and let the viewer do the swimming. 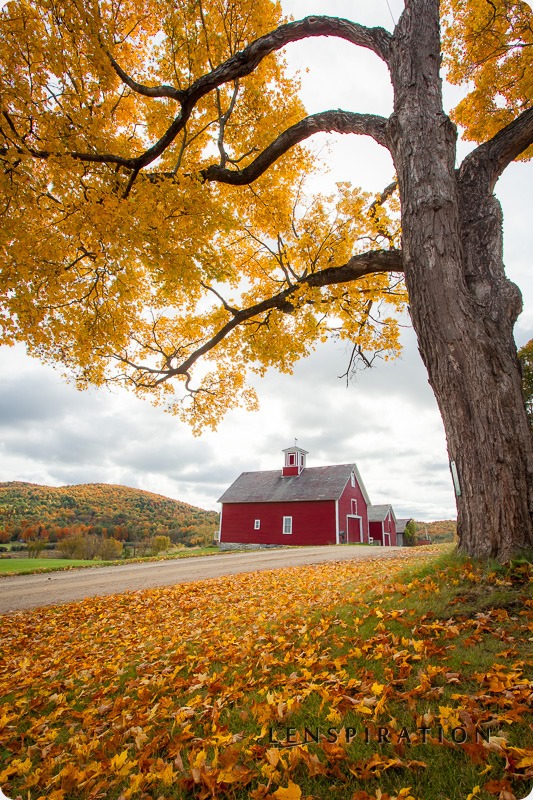 In the middle of the day, one may have considered this tree in the background of the following photo to be green. Well, maybe yellow-green. At any rate, shooting during the golden hours sorta help things look more . . . well, more golden. 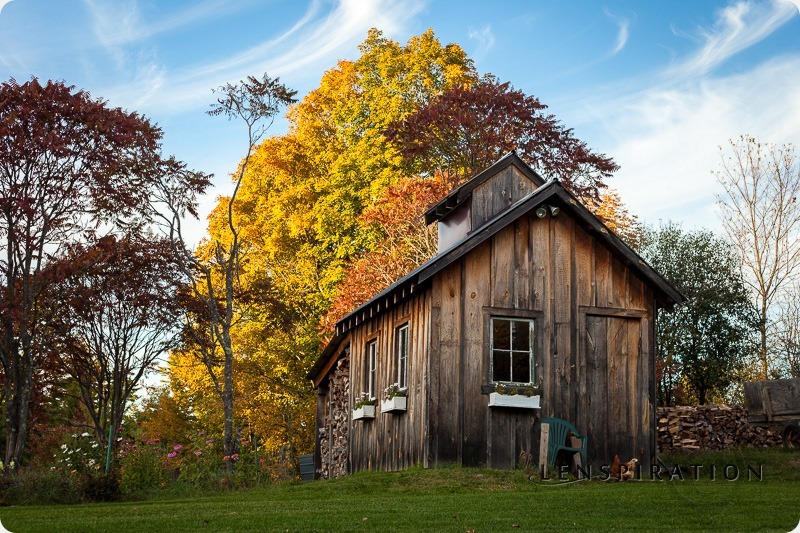 I don’t have very many good examples of this because I don’t shoot macro much (I don’t have a macro lens). But when I see a really brilliant leaf, I’ll try to get in real close, as close as I can. It makes what’s colorful the main subject, so the background doesn’t necessarily have to be as colorful as you might think. The background in the following shot is mostly brown, blue and green. 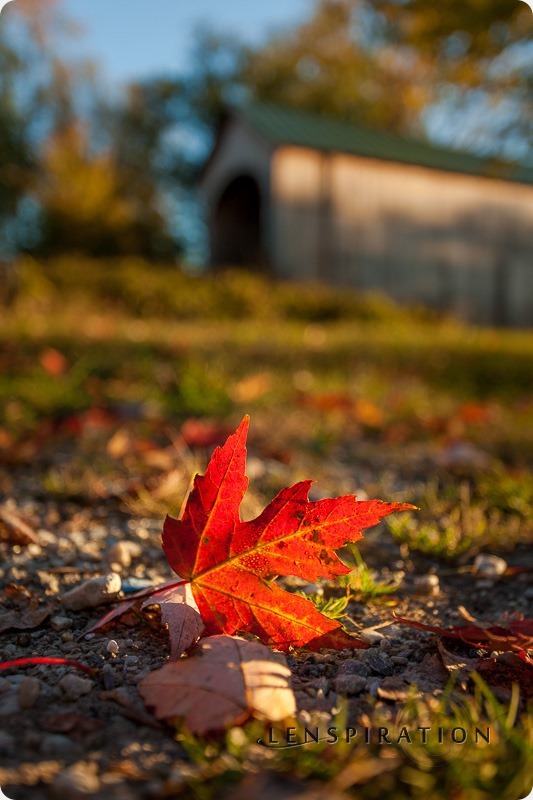 These are only the fall foliage tips that happened to be on my mind at the moment . . . there are many, many more! Here are a few fall foliage photogaphy articles from around the web that I’ve found helpful:

And of course, photographers in The Click can watch Lenspiration’s video series on autumn photography: